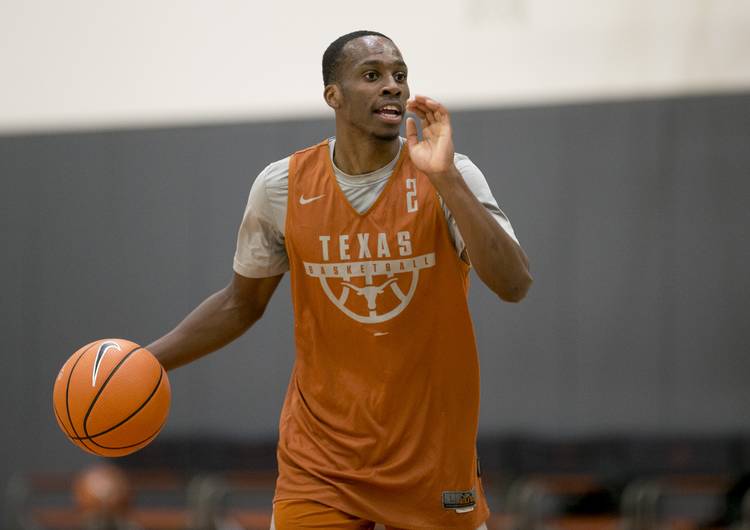 “Oh yeah, I’ve seen it,” Coleman said. “People mention it on Twitter saying, ‘I can’t wait until Matt Coleman arrives on the Forty Acres. We need a point guard.’

“I watched all their games (last season), and every game I got a shout-out,” he added. “Someone would say, ‘They’re OK. They got Matt Coleman coming in next year as a point guard.’ I was thinking, ‘Wow, I’ve got a lot of recognition, a lot of respect.’ So now I’ve just got to come here, earn it and perform.”

Yes, it was obvious last season. The Texas men’s basketball team lacked a true point guard, someone to direct traffic, start the offense and generally keep things moving. Others ended up playing out of their natural positions, and it’s a big reason why Texas went 11-22.

Now, this 6-2 athlete from Norfolk, Va., enters the fray, a player that coach Shaka Smart has coveted since Coleman’s middle school days. The first three words of Coleman’s UT bio says it all — “True point guard.”

Internally, it’s hoped that Coleman is just as important to Smart as T.J. Ford was to former coach Rick Barnes. That’s not to say Coleman is Ford, only that without a rock-solid point guard, things go haywire quickly.

Don’t expect a slew of highlight-reel moments, though. That’s not necessarily Coleman’s style, nor does that fit Smart’s vision. “In our open scrimmage at Gregory Gym, I told Matt that his job was to get Mo Bamba 13 shots,” Smart said. “And you know how many shots he had? Thirteen.”

Therein lies Coleman’s first priority. Get Bamba the ball. Get it to Dylan Osetkowski inside, too. Find Andrew Jones, Eric Davis Jr. and Kerwin Roach Jr. on the wings. Look for Jericho Sims cutting to the basket. Push the ball on run-outs. Slow it down when needed.

“Matt’s basketball IQ is at such a high level, he does things that don’t show up on the stat sheet,” Osetkowski said. “If he doesn’t have some crazy stat line, like a double-double with assists, he’s going to do something on each possession that helps the team offensively or defensively.”

Davis said Coleman shouldn’t feel like he has to carry this team by himself.

“Hey, the talk was we needed a point guard and we finally got you. Cool,” Davis said. “But you still have to play your game. Relax. You’re a freshman. You’re going to make mistakes. But you’re our point guard. You lead our team on the floor.”

Coleman has the disposition Smart needs in this position and the pedigree to boot. Coleman, Bamba and fellow UT sophomore James Banks all were on the Team USA Under-18 team that Smart coached in 2016. That group won a gold medal at the FIBA Americas championship in Chile.

Then last season at Oak Hill Academy in Virginia, Coleman averaged 12.3 points, 7.9 assists and 4.4 rebounds as the team went 37-5. His father, Clifford, played Division III basketball and is now a head coach at a junior college in Virginia Beach.

“You can coach him hard, you can tell him the truth,” Smart said. “Some people are sensitive and you have to craft your message a certain way. With him, you don’t have to do that.”

That’s good, because there could be some difficult times ahead. Most freshmen need an acclimation period. They’re simply not ready for the physical nature of college basketball. Usually they’re the best player in high school, probably the best in their district. This is a completely different level.

Look at Texas’ exhibition win over Texas A&M on Oct. 25. Coleman had five points, two assists and three turnovers in 19 minutes. Oh, and five fouls against the Aggies’ perky backcourt.

“As a freshman, 18 or 19 years old, you’re just getting thrown into the fire and you got to be ready to perform,” Coleman said. “It starts in practice. It starts with me just getting a feel, like taking a college bump when the other guards are being really aggressive with me. Shooting, shooting. Everything’s faster.

“But I know I’m not going to get it all right now,” he added. “Each day, I feel like I’m working toward being that point guard everyone is looking for.”

Each day could be a little bit better than the next. That’s all Smart is asking from the player everyone expects to be championship ready from the start.

“That’s been my message to him — just be calm, cool and collected,” Roach said. “Everything else will take care of itself.”