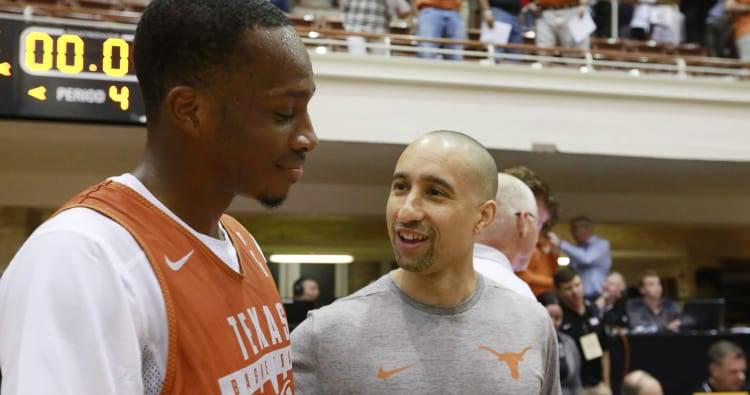 Texas men’s basketball coach Shaka Smart has a noticeable spring in his step, a glide in his stride that reflects his upbeat attitude.

Smart’s first season was all about how well he could manage former coach Rick Barnes’ players. His second was a complete rebuild after losing seven scholarship players. Last year’s 11-22 finish was a chaotic mess that led to a complete program reset.

So, what’s different? If you haven’t been paying attention, most everything.

It’s a totally different roster built by Smart and his staff on the heels of back-to-back top-10 recruiting classes. He signed another one on Wednesday, but those four players won’t be here until next year.

Before then, Texas could make huge strides toward men’s athletic director Mike Perrin’s stated goal in October. “I believe we need to be a basketball school,” he said.

Smart lost first-round draft pick Jarrett Allen to the Brooklyn Nets. The Longhorns upgraded. Smart personally took the recruiting lead on 7-footer Mo Bamba from Harlem, N.Y. He’s a likely one-and-done player, too, so better catch him while you can at the Erwin Center.

Bamba watched the Horns last season from afar and saw the same thing everybody else did — a lack of brute force in the middle. His 7-foot-9 wingspan may change all that.

“Last year, there wasn’t really any evidence of anybody with that kind of edge,” said Bamba, who was voted the Big 12 preseason freshman of the year. “And if there was, it wasn’t as outright and apparent as it needed to be. Establishing that early as our team identity would pay dividends.”

Smart desperately needed a point guard, so he reeled in the one he’s eyed for years. Freshman Matt Coleman was an instant starter the day he signed a national letter of intent.

“We have all the right pieces to win,” Coleman said. “Now, it’s all about coming together and putting in that work every day so we can have a better season than 11-22.”

By adding Coleman, that allows others to go back to their natural positions.

Andrew Jones, who spent the offseason testing the NBA waters, can focus on shooting guard. He shot 32.8 percent from 3-point range last season. If Jones learned anything from the NBA scouting combine in Chicago, it’s that he needs to be more consistent. Same goes for Eric Davis Jr., who shot 37 percent overall as a freshman but 33 percent as a sophomore.

Good luck getting anything out of Jericho Sims, who may be the quietest college freshman you’ll ever meet. The Minnesota native averaged 25 points per game and finished as the all-time leading scorer at Minneapolis Cristo Rey. Throughout the preseason, he showed an uncanny ability to cut to the basket for dunks. His mid-range shooting game is still unknown, but if nothing else, the Horns can use a 6-foot-9 body who will grind down low.

Royce Hamm Jr. and Jase Febres are two more freshman that helped make up a top-10 recruiting class. Both might be role players early, but in the brutal Big 12, a deep bench is a must.

Dylan Osetkowski has been with the program so long, he doesn’t feel like a newcomer. Yet the 6-9 forward will finally make his UT debut on Friday after sitting out last season per NCAA transfer rules.

Osetkowski said he’s no longer bothered by a right wrist injury that hampered his shooting during the preseason. He’s simply ready to get going. Osetkowski and Bamba are a pair inside on the level of Cam Ridley and Prince Ibeh, but this duo has more scoring possibilities.

“Coach (Daniel) Rouse, our strength coach, has been saying he’s the most excited guy in our program,” Osetkowski said. “I’m kind of looking at him saying, ‘You know I’ve been sitting out for a year, right?’ My energy and focus for the past year, however many days it was, has been toward this moment and on.”

Smart already has some idea what he’s got. Maybe that’s why he’s smiling. These Longhorns went 2-2 during a summer Australian trip against professional teams. Texas also beat Texas A&M, picked third in the SEC, in an exhibition game in Houston. Closed scrimmages against SMU and LSU gave this bunch more confidence.

“The carry-over component is absolutely critical,” Smart said. “It doesn’t matter what you practice, what you talk about, what you work on; if you’re not able to do it in a game, it doesn’t amount to much.”

The coaches and veteran players know last season was unacceptable. Nothing they can do about that now. All they’re doing is looking ahead. They know it’s time the Longhorns start winning again.

The post Shaka Smart begins third season at Texas with retooled roster and some Mo-mentum appeared first on Hook ‘Em.