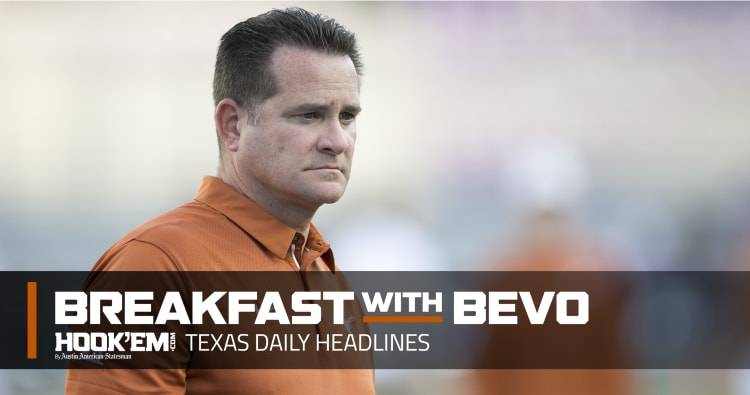 Sound Off: Why is the Texas offense struggling

Texas beat writers Danny Davis and Brian Davis talk about the struggling Longhorns offense and whether or not Texas can reach a bowl game. The duo also touches upon the quarterback situation. They then turn to a discussion of other Texas sports making headlines this week.

Brock Cunningham, a senior from Westlake, signed a letter of intent to play for the Texas Longhorns basketball team on Wednesday. The forward is a part of the nation’s seventh-ranked class, according to 247Sports, along with three other signees. Every signee is at least 6-foot-6 for Shaka Smart’s third straight top-10 class, based on 247Sports yearly rankings.

Whys of Texas: Is playing hard enough to win? Hardly

In this edition of the Whys of Texas, Texas beat writer Brian Davis examines why playing hard isn’t enough. While the defense seems to be improving, the offense is failing to inspire. It’s a surprise since Tom Herman’s specialty is on the offensive side of the ball. While the offensive line is hurting, it’s not the only issue the unit is dealing with, however. Two freshman have taken over at running back and the quarterback situation is quite murky. Davis received emails and comments from fans asking questions mostly centered around the Texas offense this week.

Longhorns defensive coordinator Todd Orlando has been nominated for the Broyles Award, given to the nation’s top assistant coach in college football annually. The Frank and Barbara Broyles Foundation announced the names of 56 nominees Wednesday. Nominees included offensive coordinators from Oklahoma and Oklahoma State, as well as Miami defensive coordinator Manny Diaz. Orlando’s defense is allowing 21.3 points per game.

A ‘hammerhead’ with speed

Herman described junior college transfer Gary Johnson as a ‘hammerhead’ at his signing day press conference in February. Johnson has made two starts in a row for the Longhorns and is seventh on the team in tackles. The junior from Douglas, Ala., utilizes his speed to make an impact on the field. Herman says Texas is progressing toward being one of the top defenses in the country.

Once described as a “hammerhead,” Gary Johnson is also using his speed to lead Texas’ linebackers

The Week 11 guide to watching Texas commits in action