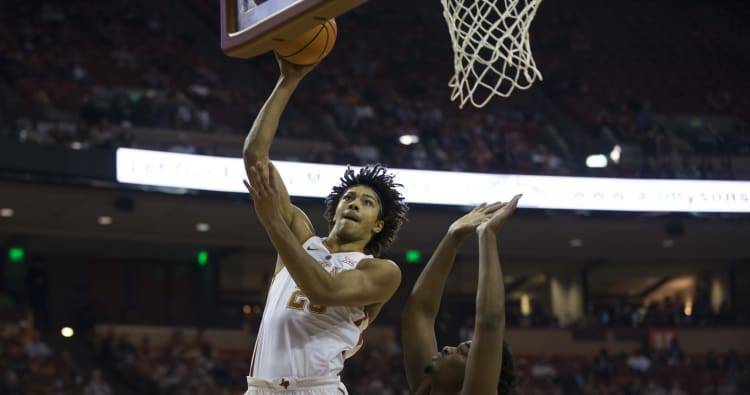 There’s a growing sense within Cooley Pavilion the Longhorns could actually have a stronger bounce-back season in Shaka Smart’s third year than outsiders really believe. The first step on their journey was a complete success.

Texas absolutely throttled Northwestern State 105-59 on Friday before a larger-than-one-might’ve-expected crowd at the Erwin Center. Just how easy was it? Texas had 62 points at halftime. The Horns didn’t even score 60 points total in seven games last season.

As it turned out, this was the second time in the Smart era the Horns scored more than 100 points. Jacob Young’s throw-down dunk with 1:39 remaining pushed the Horns into triple-digit territory.

Six players finished in double figures as the Horns (1-0) shot 49 percent and administered one of the most through beatdowns in years. A team that wants to be the best defensive unit in the nation allowed the Demons to shoot 37.5 percent.

There are plenty of choices, but this one goes to Dylan Osetkowski, who’s waited an entire year to don burnt orange after transferring from Tulane. He made some real hay in the first half. Osetkowski was here, there, practically everywhere.

His best sequence came on a defensive rebound, then he started the run out, trailed the play and slammed home a missed 3-pointer by Kerwin Roach Jr. Osetkowski finished with his first double-double — 13 points, 10 rebounds in 21 minutes.

Smart’s two much-hyped freshmen did not disappoint. Center Mo Bamba finished with 15 points on 6 of 9 shooting and had several smooth moves around the bucket. He also grabbed eight rebounds. Guard Matt Coleman dished out seven assists in addition to scoring 11 points.

Another freshman that’s been flying under the radar this preseason is Jase Febres. He wowed the crowd with 13 points and went 3 for 7 from 3-point range.

Another Horns Up goes to Nike, who got the Longhorns some green-themed shoes to wear in honor of Veterans Day.

Thanks @KDTrey5 for hooking us up with these kicks for Veterans Day!

Not much to pick at in a blowout win. Northwestern State’s coaching staff will be disappointed how the Demons couldn’t handle the Horns physical nature. Four players had four fouls with 15:45 remaining.

Even bad teams can make free throws. At least, they’re supposed to. C’mon, it’s an uncontested 15-footer. Whatever the reason, the Longhorns were the worst free-throw shooting team in the Big 12 last season, having made just 65 percent of their tries. This looked like a totally different unit on Friday. Texas was 17 of 19 from the stripe in the first half.

Texas will be back in action Tuesday against New Hampshire at 7 p.m. Tuesday at the Erwin Center.

The post At the buzzer: Texas 105, Northwestern State 59 appeared first on Hook ‘Em.

Texas 105, Northwestern State 59: At first glance, the Longhorns may have something