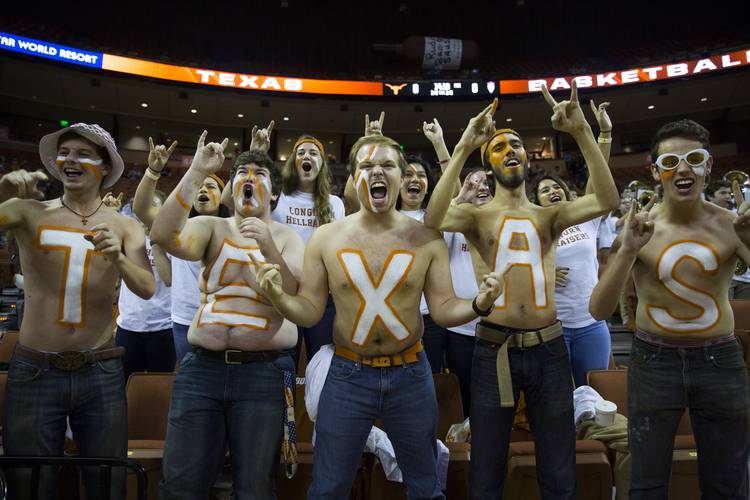 AUSTIN, TX - NOVEMBER 10, 2017 - The University of Texas Hellraisers cheer on the Texas Longhorns against the Northwestern State Demons at the Erwin Center. (Erich Schlegel/Special Contributor)

The canvas doesn’t get any brighter, the slate can’t be any cleaner, than on opening night. The first markings set the whole tone for what comes next.

The contours come in December, things take shape in January, polish and perfections come in February and the picture becomes complete in March. Whatever happens on a Friday night in mid-November could mean everything. Or nothing.

Still, Texas definitely passed the eyeball test with a rollicking 105-59 beatdown over Northwestern State at the Erwin Center. Seven players finished in double figures as the Longhorns (1-0) scored more than 100 points for just the second time in Shaka Smart’s two-plus seasons.

A larger-than-expected crowd of 9,516 fans, which included a strong student turnout, had to walk away impressed. The Horns walked around in impressive style, that’s for sure. Nike provided the team with special green shoes in honor of Veterans Day.

“That’s the style of play that we’ve been wanting to play for, what we’ve been building for,” sophomore guard Andrew Jones said. “It showed tonight. And there’s only more to come.”

Sure, a lot of fans came to see freshman Mo Bamba, and he did not disappoint. Bamba opened his one and only season at Texas with a dunk and finished with 15 points, eight rebounds and four blocks in 23 minutes.

But this team is far more than one 6-foot-11 star center, and that was the clear takeaway.

“Last year, you saw Jarrett (Allen) just get better and better and better,” coach Shaka Smart said. “But we didn’t have enough around him in terms of guys contributing at a high enough level to winning.”

Basketball is a team game, Smart stressed. “Mo’s going to do a lot of good things, but we need help from a lot of other sources besides him,” the coach said.

Start with the big man who got short-changed that assist on the opening basket. Dylan Osetkowski, the transfer from Tulane, posted his first double-double with 13 points and 10 rebounds. His turnaround jumper, running put-back slam and 3-pointer were all impressive.

If the Horns can get consistent mid-range offense from Osetkowski, that should loosen things up elsewhere.

“I’m just trying to bring a level of hustle, spirit, everything, rebounding,” Osetkowski said. “My ability to shoot the ball is only going to get better from here.”

The guard play certainly looked better. Freshman Matt Coleman had 11 points and seven assists. He rifled a pass inside to Bamba for a would-be dunk, but Bamba got raked. If Coleman continues at that pace, he’ll lead the Big 12 in assists.

Eric Davis Jr. swished a 3-pointer from the right wing. He played only nine minutes due to a groin injury suffered two days ago in practice.

It’s also apparent this Texas team has real depth, something that was sorely lacking during last year’s 11-22 campaign. Jase Febres hit three 3-pointers and finished with 13 points. Jericho Sims had five rebounds and showed hustle. Royce Hamm, Jacob Young and James Banks all have various roles that will take shape in the coming weeks.

There will be nights when Bamba has to be a superstar, someone worthy of all that NBA draft hype. But this looks like a team that could survive if he has an off night.

All the offensive potential was on display in the first 10 minutes. Jones hit a 17-footer and then drained a 3-pointer. Sims found Febres on a backdoor cut for a layup. Osetkowski did his thing, Bamba scored on another dunk and next thing anybody knew, Texas led 30-11.

No need for grandiose statements at this point anyway. It might be better for Texas to toil in anonymity before getting on the national radar.

This team has something. But again, it’s a long, grinding process to reach a finished product. These were big, bold, initial strokes.

“We’ve worked hard for this all summer long and pre-season,” Jones said, “and now we’re ready to show this is what we’re about and this is the culture at Texas.”

The post Texas 105, Northwestern State 59: At first glance, the Longhorns may have something appeared first on Hook ‘Em.

At the buzzer: Texas 105, Northwestern State 59