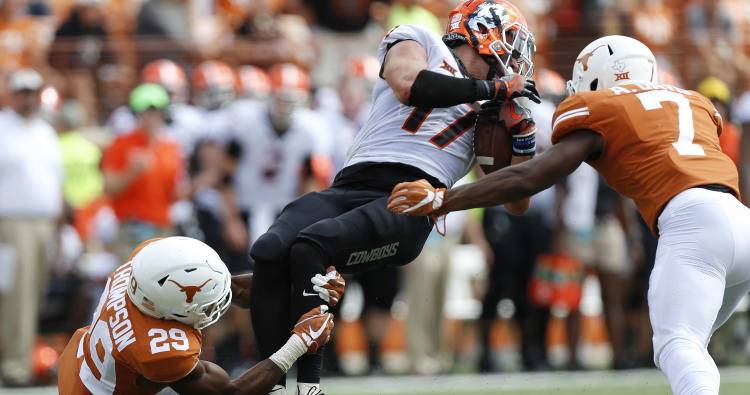 This week’s notable number is 14.

Fourteen is a number worn by senior receiver Lorenzo Joe, who has 11 catches this year. Linebackers Anthony Wheeler and Jeffrey McCulloch have each forced a loss of 14 yards over their 1.5 sacks. Texas has produced two 10o-yard receivers in the same game 14 different times, but it last occurred in a 40-21 loss at BYU in 2013.

Fourteen also represents the number tackles that junior Davante Davis and freshman Josh Thompson have combined for this season. Neither cornerback has recorded an interception or a pass breakup.

Thompson (11 tackles in six games) and Davis (three tackles in six) have mostly had supporting roles. That will change going forward, though. On Tuesday, Texas suspended All-American candidate Holton Hill for the remainder of the season for a violation of team rules.

Thompson was listed as Hill’s backup on the team’s depth chart on Monday. Davis was set to back up Kris Boyd at the other cornerback spot. On Thursday, Texas coach Tom Herman said Davis will likely start in Hill’s place and Thompson will be in the mix for playing time.

“Josh is very physical and Davante is very physical, and they’re both good in pass coverage,” linebacker Malik Jefferson said. “It will be interesting to see who’s going to take that spot. They’ve been practicing hard all year, so they’ve been ready for moments like this.”

Davis has experience on his side. A member of Texas’ 2015 recruiting class, Davis has 10 career starts. In 2015, he led the Longhorns with seven pass breakups and was an honorable mention selection on the Big 12’s all-conference team.

Davis failed to immediately impress UT’s new staff, and Herman told reporters in August that the 6-3, 200-pound Miami native “needs to continue to earn our trust in terms of, you know, he’s physically able to do it, he just has some breakdowns from time to time that can be costly, so he has to be more consistent.” Davis has played sparingly, but did start for a suspended Boyd against USC.

Thompson was a four-star prospect from Nacogdoches who originally committed to Charlie Strong. A high school teammate of UT starting safety Brandon Jones, Thompson has made a team-high six special teams tackles. He also downed a punt at the 2 against Oklahoma.

“Josh has really come along in terms of progress made throughout the course of the season,” Herman said. “That’s a true freshman that really embraced getting better, embraced his opportunities on special teams, and has worked his way into being a guy that we think we can count on in that role too.”

UT’s secondary has benefited from consistency. Hill, Jones and safety DeShon Elliott had started every game and Boyd’s suspension against USC lasted for only a quarter. Texas, however, will be without Hill and nickelback P.J. Locke III, who will likely miss his second straight game with an ankle injury.

Texas ranks 94th nationally in pass defense, allowing 250.6 yards a game. But those numbers look better when stacked up against other teams in the pass-happy Big 12. Only TCU and Iowa State are allowing fewer yards, and Texas boasts the Big 12’s third-best defensive efficiency against the pass (127.0). Texas has surrendered a conference-low 10 touchdown passes.

At 239.3 yards per game, Kansas has posted respectable passing numbers this season. Things, though, will get tougher for Texas and whoever its new cornerback ends up being. West Virginia’s Will Grier and Texas Tech’s Nic Shimonek are tied for fourth nationally in passing.