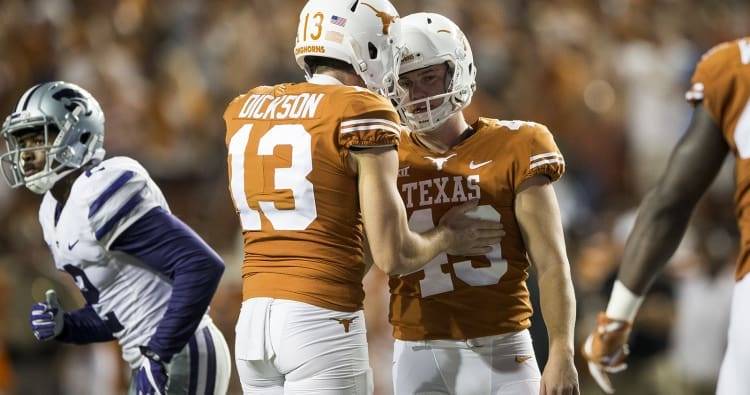 1. What will Jerrod Heard’s role be?

The versatile junior has played as both a wildcat quarterback and a receiver who’s caught 12 passes. But his playing time has been severely limited the last two weeks because he was serving as Shane Buechele’s backup with Sam Ehlinger out with an injury. Now, with Ehlinger healthy, Heard will move back to receiver while keeping a small package of plays at quarterback. For his career, Heard is averaging 3.8 yards per rush and 10.4 yards per catch. Will Texas utilize him?

Under the direction of Broyles Award nominee Todd Orlando, Texas has consistently held offenses to under their season averages. Maryland and Kansas State are the only UT opponents that bettered their averages when they played Texas. Oklahoma State, which is scoring 45.3 points a game (No. 2 in the country), scored only 13 against the Longhorns and Oklahoma, which is scoring 45.0 points a game (No. 3), scored 29. The Jayhawks aren’t anywhere close to the Cowboys or Sooners; Kansas is scoring 19.7 points per game.

Joshua Rowland still topped the depth chart when the week began, but Tom Herman said Mitchell Becker may get the nod on Saturday after a better week of practice. Rowland has missed half of his 14 field goal attempts, though he did nail a 49-yarder at Iowa State last month. He’s also a perfect 32 of 32 on extra-point attempts. Becker, a fifth-year senior, hasn’t played this season but did make 24- and 31-yard field goals in last year’s season finale against TCU.

4. Will Texas beat Kansas — and the spread?

Kansas (1-8) is a heavy underdog, and Texas (4-5) is viewed as a 34-point favorite. That staggering line may seem startling since Texas has failed to even score 34 points in three of its last four games — and don’t forget that 24-21 overtime loss in Lawrence last year. Still, Kansas has lost eight straight after falling 38-9 to previously-winless Baylor last week. Texas, lifted by 56- and 31-point routs of San Jose State and Baylor, has an average margin of victory of 25.8 points.