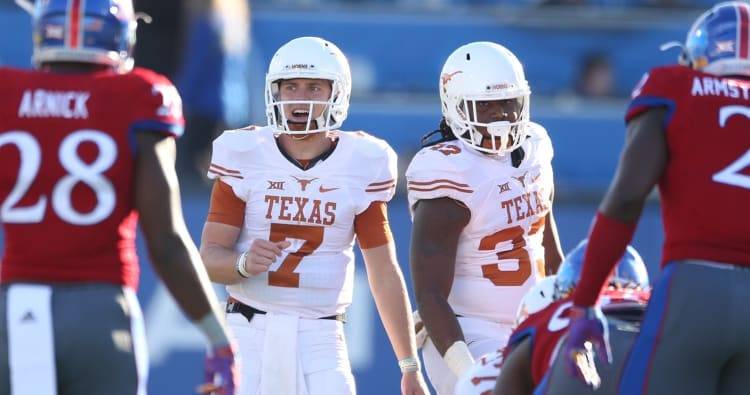 Texas senior linebacker Naashon Hughes likely will make his 35th career start on Saturday. Kansas’ Chris Hughes, a redshirt freshman and Naashon’s younger brother, has started at right guard all season. Texas’ Hughes has two sacks this season. Will he be able to generate any pressure against his brother’s line, which ranks 85th nationally in sacks allowed at 2.33 per game?

Shane Buechele vs. Kansas’ defense (Round 2)

Last year in Lawrence, Buechele’s first pass resulted in a 75-yard touchdown. His last throw, however, was a critical interception on Texas’ first possession in overtime. He was picked off by Mike Lee, who’s leading the Jayhawks in interceptions this season, and Kansas won the game on a field goal. This will be Buechele’s fifth start this season but he hasn’t come within 100 yards of his season-opening 375-yard day against Maryland. Kansas, though, is allowing the third most passing yards per game in the Big 12 (277.4).

Texas began this week with a starting cornerback who was an All-American candidate, but Holton Hill was suspended for the rest of the season on Tuesday. Davante Davis, a junior with 10 career starts, will see some playing time across the field from mainstay Kris Boyd, as should freshman Josh Thompson. Led by Steven Sims Jr., Kansas’ pass-catchers are averaging 11.6 yards per reception.

This game features the Big 12’s the past two Big 12 preseason defensive MVPs, though neither Texas linebacker Malik Jefferson (2016) or Kansas defensive end Dorance Armstrong Jr. (2017) lived up to that preseason billing. Jefferson finished with 62 tackles last season as well as a much-publicized benching. He’s bounced back this season, though; his 82 tackles lead the team and no other Longhorn is within 35 stops from him. Armstrong has 47 tackles and only one sack this season.

Last year, Texas gave D’Onta Foreman a school-record 51 carries against Kansas. Will any Longhorn get even 20 carries this year? Chris Warren III, the team’s leading rusher, has had only three carries over the last two games as freshmen Toneil Carter and Daniel Young have accounted for 34 combined attempts. Kyle Porter is also an option. Whoever the runner is, Kansas has allowed five 100-yard rushers.