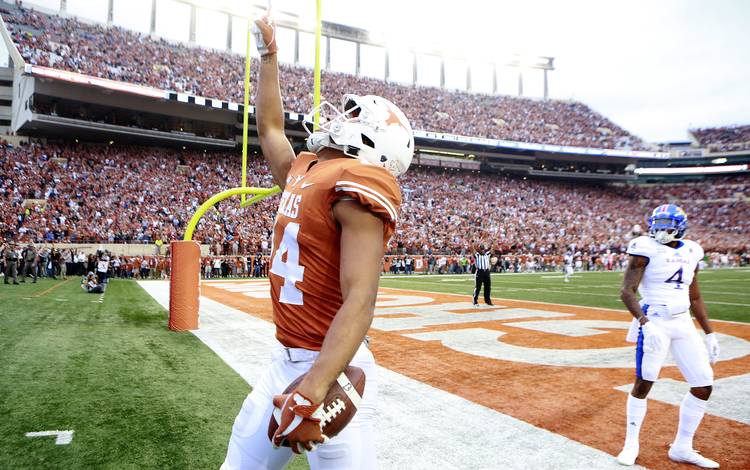 Texas wide receiver Lorenzo Joe (14) celebrates a touchdown reception on the first play of the game past Kansas defender Shaquille Richmond (4) in the first half of a Big 12 Conference football game at Royal-Memorial Stadium, Saturday, Oct. 21, 2017. (Stephen Spillman / for American-Statesman)

The end of the season is nearing, and Texas still needs two more wins to claim bowl eligibility. It hopes to get halfway there Saturday as it hosts Kansas in the penultimate home game of 2017 at Royal-Memorial Stadium.

Get a feel for the atmosphere as we keep you up to date with live social media posts — photos, videos and opinions — from inside the stadium. Check back throughout the game.

Way to end on a high note Texas. #HookEm #ThisIsTexas

I️ have scored the same amount of points from my recliner as Tim Beck’s offense has in the 2nd half of this game. Zero. I️ wonder where he is coaching next year. #HookEm #TexasVsKansas

Why am I biting my fingernails against Kansas. #HookEm

Texas should be wiping the FLOOR with Jayhawk feathers right now!! No mercy Horns!! #HookEm @TexasFootball

It is an unknown law of physics that the Texas offense and defense can't both play well on the same night. #HookEm

A great day for some Texas Longhorn football. #HookEm #ThisisTexas

The Eyes of Texas: 3 Jayhawks the Horns will be watching