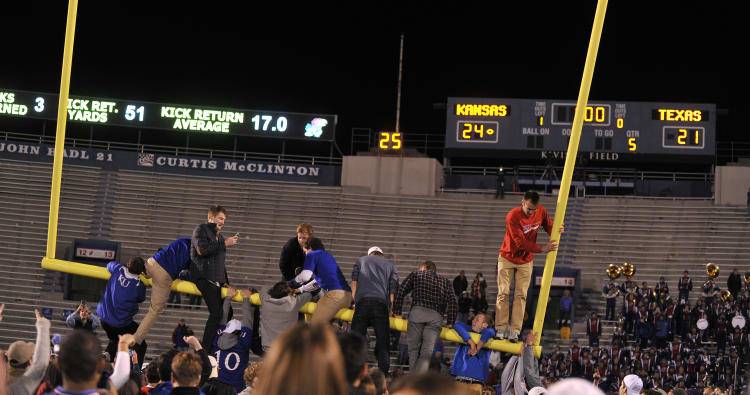 The idea of a “revenge game” is  often overstated in college football. With the amount of roster and coach turnover season to season, each game often takes on a life of its own.

However, it seems legitimate that Texas players have been waiting to get a piece of Kansas since suffering an embarrassing 24-21 loss to the Jayhawks in 2016. First the Longhorns lost their shot at bowl eligibility, then they lost their coach in Charlie Strong. There’s a bad taste left over from that night in Lawrence. There has to be.

Weather: The forecast calls for a high of 72 degrees on Saturday with a low of 61. There is a 10 percent chance of rain with wind expected to come from the southeast at 5 to 10 miles per hour. Sunset is 5:36 p.m.

The line: Texas is a 34-point favorite to beat Kansas.

Which TV channel is Texas-Kansas on?

The game between Texas and TCU in Week 10 is on Longhorn Network. Lowell Galindo (play-by-play), Ahmad Brooks (analyst) and Kris Budden (sideline) will be the announcers.

How can I watch the Texas-Kansas game online?

The game between Texas and Kansas will be streamed live on WatchESPN.com and via the ESPN app. You can access the broadcast with a cable subscription login.

How can I listen to the Texas-Kansas game on the radio?

The Texas-Kansas game in Week 10 will air live on the Longhorn IMG Radio Network. In Austin, the local radio affiliate is 104.9 The Horn. A full list of Longhorns radio affiliates can be found here, or you can click the play button below to listen online.

Texas-Kansas preview, 3 keys to the game

The Texas defense suffered a blow Tuesday when it was announced that cornerback Holton Hill would be suspended for the rest of the season. Hill had been enjoying the best season of his college career, and was a key piece on the defense that has buoyed the Longhorns all season long. Hill is currently second on the team in tackles with 51 and had 2 interceptions — both of which were returned for touchdowns. Texas coach Tom Herman said either Davante Davis or Josh Thompson would replace Hill in the starting lineup.

Freshman Sam Ehlinger was held out again at TCU because of what Herman called an “inner-ear issue.” He is expected back this week, but will he start? The offense sputtered against the Horned Frogs, but that was more due to the complete lack of a rushing attack than the performance of Shane Buechele. Columnist Cedric Golden argues that it might be time to consider the “nuclear option” — Jerrod Heard.

Texas should have learned its lesson after losing to Kansas last year, but that was under a different staff. The players know the Jayhawks have struggled, but they can’t afford a letdown that might cost them a potential bowl berth. The Longhorns took care of business two weeks ago at Baylor. Can they buckle down and assert dominance over another lesser opponent?

Texas 105, Northwestern State 59: At first glance, the Longhorns may have something

The Eyes of Texas: 3 Jayhawks the Horns will be watching