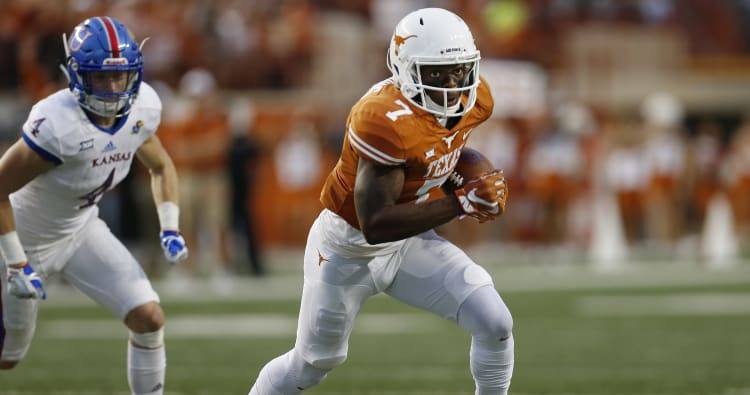 As the cliché goes, the best defense is a good offense.

The Texas defense could argue that the inverse also applies.

Texas scored its fifth defensive touchdown of the season in Saturday’s 42-27 win over Kansas. The Longhorns also had two additional touchdowns set up by turnovers. For the season, UT’s 18 turnovers have led to 79 points.

“I’m excited about what it says right there,” said Texas coach Tom Herman, referring to a sign in a team meeting room that listed UT’s four plans to win, one of which was “Play great defense.” “Our plan to win is play great defense, and for the most part when you’re scoring points on defense and getting turnovers, that’s a big part of that.”

Getting into the end zone against the Jayhawks was fifth-year senior Antwuan Davis, who was replacing injured nickelback P.J. Locke III for a second straight week. Davis intercepted a first-quarter pass from Kansas quarterback Carter Stanley and returned it 16 yards for a score.

Davis’ touchdown off an interception was his defense’s fifth this season, which ties a school record set in 1987 and matched in 2000. Texas safety DeShon Elliott returned interceptions for scores against USC and Baylor. Holton Hill, who has been suspended for the rest of the season, had pick-sixes in UT’s first two games.

“We’ve been giving each other a hard time,” Davis said. “DeShon, he might be like, well, a couple people (don’t have an) interception. He’ll just cough and we kind of know who it is.

“Ultimately, we’ll go out and practice. You catch the ball in practice, you’re going to catch it in the game.”

Hill also scored off a blocked field goal against Maryland. Those half-dozen non-offensive trips to the end zone have been booked one year after Texas’ defense and special teams failed to score a touchdown.

“We’re just ballin’, having fun, playing for each other,” Elliott said. “It starts up front.”

The unsung heroes of Texas’ high-scoring defense may be a line that has recorded 25 sacks and 17 quarterback hurries this year. After a win at Iowa State in September, Elliott credited the defensive linemen with “doing the work, we’re just back there looking pretty.” Well, being pretty has its price.

The Texas defensive backs have thanked their linemen with food. Sophomore Malcolm Roach, however, admitted that he and his teammates in the trenches “run the check up all the time.” Such was the case during a mid-season dinner at Wingzup.

“Them boys went crazy,” Elliott recalled on Saturday night. “My bill alone was about $30, $40 on one d-lineman. I was, like, come on, we get scholarship checks, can you all just take a break on us?”

Elliott answered a couple more questions in his post-game press availability before Poona Ford, UT’s 305-pound defensive tackle, interrupted to ask, “When are we going out to eat again?” Feeling a pressure that many quarterbacks have known this year, Elliott set the date for Monday.

“They be a little mad, but they always say we’re down there doing the dirty work,” Roach said. “It pays off for them to play good, and we just continue to play hard.”

The post Defensive touchdowns are proving to be costly for both opposing quarterbacks, UT defensive backs appeared first on Hook ‘Em.