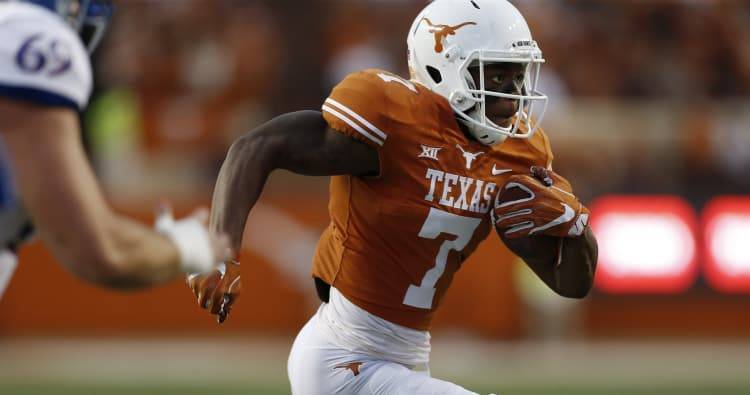 Welcome to Big 12 DieHards’ Week 11 Defensive Player of the Week. There were a number of exciting performances across the Big 12 from defensive players, but one stood apart.

Texas’ secondary is in shambles after an unfortunate series of suspensions and injuries. However, that just meant a couple of experienced pieces finally got time on the field. Senior Antwuan Davis took full advantage of his opportunity.

The Longhorns were generally unimpressive on Saturday against Kansas, giving up 27 points and 364 yards to a bad team. However, Davis’ performance ensured things never really got competitive.

Texas punter Michael Dickson downed a punt at the 1-yard line after UT’s second drive of the game. Three plays later, Kansas faced 3rd-and-9 from the 2-yard line. Carter Stanley threw a pass, and Davis jumped in at the 16-yard line and picked it off. He returned the pass for a touchdown to give the Longhorns a quick 14-0 lead.

Later in the half, Kansas was in the midst of a 12-play drive. The Jayhawks could cut it to 35-24 with a touchdown, and were within the 5-yard line. Then, Davis jumped another passing lane and caught another interception, which was ruled a touchback. That allowed Texas to go into the half up 35-17.

Davis had never recorded an interception at Texas. Posting two in a game is a nice way to start, even if it was against a ghastly Kansas team.

Defensive touchdowns are proving to be costly for both opposing quarterbacks, UT defensive backs