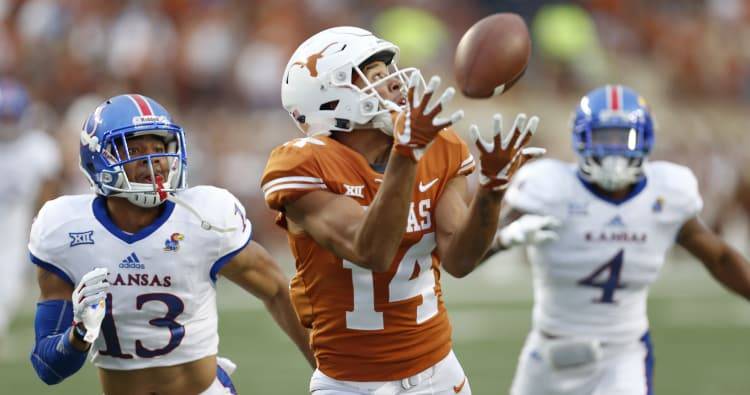 There were 152 snaps taken in Texas’ 42-27 win over Kansas on Saturday. Here are five that ended up making a big difference:

Kansas won the coin toss but deferred its decision to the second half. The Jayhawks instead elected to open the game with an onside kick. Texas junior John Burt, though, was in position to recover the football and thwart the special-teams surprise.

With the football at the Kansas 49, Texas took a shot at an early score. On the game’s first play, Texas sophomore Shane Buechele lofted a touchdown pass to senior Lorenzo Joe. The touchdown was the second of Joe’s career.

Joe finished the game with career-highs in catches (five) and yards (98). Burt was also effective in the receiving game, corralling four catches. After the game, Texas coach Tom Herman was asked about Joe and Burt’s playing time.

Said Herman: “Well, they’ve been doing things right, which is the biggest thing that offensively we’ve got to do is just do things right, be at the right depth at the right time, block the right guy, use the right footwork, and then when it’s your opportunity at wide receiver, make a play, and then those guys have.”

2. First time for everything

Texas took a 14-0 lead with 8:05 left in the first quarter when Antwuan Davis intercepted Carter Stanley on a third-down pass. The former track standout at Bastrop High then sprinted 16 yards into the end zone, picking up a block from cornerback Davante Davis near the goal line.

Davis was starting in place of nickelback P.J. Locke III, who suffered an ankle injury against Baylor last month. A fifth-year senior, Davis had not intercepted a pass over the first 40 games of his college career. He ended up picking off two of Stanley’s 43 passes on Saturday, and the second interception was nabbed on a throw into in the end zone.

Texas has returned five interceptions for touchdowns this season.

Texas limited kicker Joshua Rowland to kickoff duties against Kansas, but the Longhorns still could not make a field goal. Senior Mitchell Becker, who last played in last year’s season finale, was wide left on a 44-yard attempt in the second quarter. Becker was perfect on his six extra points.

Rowland was 7-for-14 on field goals in Texas’ first nine games.

Following Becker’s miss, Texas attempted five fourth-down conversions inside the Kansas 40. UT earned first downs on three of those attempts. The Longhorns are 11-for-27 on fourth downs in 2017.

Kansas pulled within 28-17 in the second quarter, but the Longhorns extended their lead to 18 points by halftime. After Kansas muffed a punt return that Davis recovered, UT drove from the Kansas 22 to the Jayhawk 4 in seven plays. On that seventh play, Buechele found receiver Lil’Jordan Humphrey for an eight-yard gain.

Humphrey then took a direct snap on back-to-back plays. A 6-5, 225-pound sophomore, Humphrey ran three yards on a 4th-and-2. He then scored on a one-yard run.

Texas has found different ways to use Humphrey this season. In addition to ranking third among the Longhorns with his 31 catches, Humphrey has thrown two incomplete passes on trick plays. He has also rushed five times for 41 yards.

A 33-point underdog, Kansas stuck within striking distance of the Longhorns throughout much of the evening. The Jayhawks’ final grasp at a comeback, though, was extinguished in the fourth quarter.

Kansas trailed 35-20 with under 11 minutes to play, and the Jayhawks faced a 4th-and-2 at the Texas 29. Kansas had running back Taylor Martin take the snap, and he was promptly met by linebacker Malik Jefferson for a three-yard loss.

Texas then put the game away with a 12-play touchdown drive.

After a seven-tackle evening, Jefferson has recorded 93 stops. Only 22 players nationally have more tackles. Texas has also stopped 13 of the 17 fourth-down conversions it has faced.