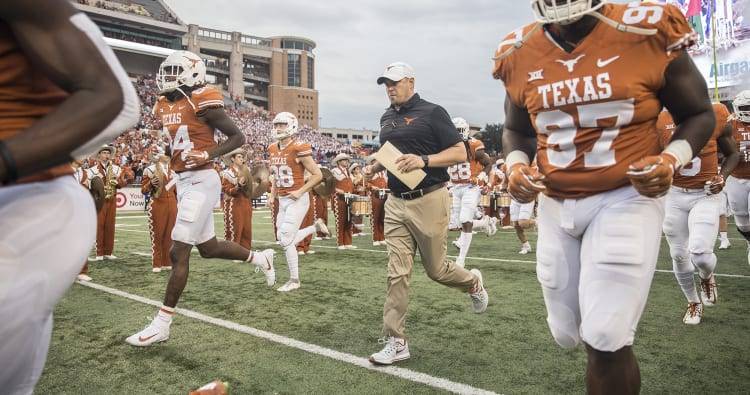 As yet another .500 season barrels toward the finish line, Texas coach Tom Herman continues to talk up the importance of getting his seniors to a bowl game.

Texas (5-5, 4-3 Big 12) needs to win at least one more game to become bowl-eligible. Maybe that comes this week at 24th-ranked West Virginia (7-3, 5-2). If not, UT’s final chance will be at home against Texas Tech the day after Thanksgiving.

This is not what Herman expected, not by a long shot. This is a coach who thought the Longhorns had an outside chance at getting to the Big 12 championship game. Instead, he’s having to fall on his sword and admit, “I think where we’re at is not where we’d hoped to be.

“There’s nobody associated with the University of Texas that that affects more than us in terms of doing everything we can to make sure we end this thing on a positive note,” Herman said Monday. “But in terms of the direction, boy, I think we are headed in a very, very healthy, good direction.”

Herman began to outline his team’s strengths, starting with the group’s overall effort, intensity and physicality.

The coach continued: “So when you look at the direction, it’s exciting. We’re not going to have to deal with some of the cards we were dealt this year. Even if we were, the development of the people who had to step into those roles is going to be one year of where we were this year.”

There was some good news on Monday. Herman said All-American left tackle Connor Williams will play this week against the Mountaineers. Williams suffered a torn meniscus in his left knee against USC on Sept. 16. He hasn’t played since.

Williams is projected by some to be a first-round draft pick next year if the junior chooses to leave school. Should Williams return to a 5-5 team with just two games remaining? Asked about his talks with Williams, Herman said, “I think I’d rather keep my conversations with Connor private.”

Herman also played coy about his quarterback situation. Sophomore Shane Buechele, who now has an 8-9 record as a starter, threw for 318 yards last season against West Virginia at Royal-Memorial Stadium. He also had the benefit of D’Onta Foreman’s 167 rushing yards.

Buechele played the bulk of the game against Kansas on Saturday. Freshman Sam Ehlinger did come into the fray and threw an 8-yard touchdown pass to Cade Brewer.

Herman said a “wide variety” of options were available against the Jayhawks. That translated into no time for third-stringer Jerrod Heard. Texas deployed receiver Lil’Jordan Humphrey in the backfield as a wildcat runner.

“Too early for me to tell anything,” Herman said. “I think these last two games, it’s going to be, ‘What do we need to do win in the game plan, and what do these guys do well?’

“I think as we see how the game plan developed, we’ll know a lot more in terms of the game reps,” the coach said. “I would imagine you’ll see both of them at some point. But in what ratio, I don’t know just yet, having watched just a couple hours of film.”

Given how the season is playing out, Herman knows there are locker room murmurs. All struggling teams have players who speak out of frustration. “The guys that are playing key roles for us usually aren’t disgruntled,” Herman said. “I don’t think there’s an issue there.”

He does sense a genuine pull to get UT’s key seniors to a bowl game. That includes defensive tackle Poona Ford and linebacker Naashon Hughes, two team captains. Cornerback Antwaun Davis, who just had his first two career interceptions against Kansas and was named the Big 12’s defensive player of the week, also is respected in the locker room.

Lorenzo Joe and Armanti Foreman will have to carry the well-wishes of Dorian Leonard, who’s out for the year with a fractured foot injury. Safety Jason Hall has also dealt out some blows in 45 career games at Texas.

Even if it’s the Cactus, Zaxby’s Heart of Dallas or Texas Bowl, it’s better than nothing.

“I think we have a senior class, an experienced class that although small is very well-respected,” Herman said. “I really do think there is a genuine desire for our guys to make sure that we get them to the postseason and they can play one more game in the burnt orange and white.”

The post At 5-5, Texas coach Tom Herman admits Longhorns ‘not where we’d hoped to be’ appeared first on Hook ‘Em.