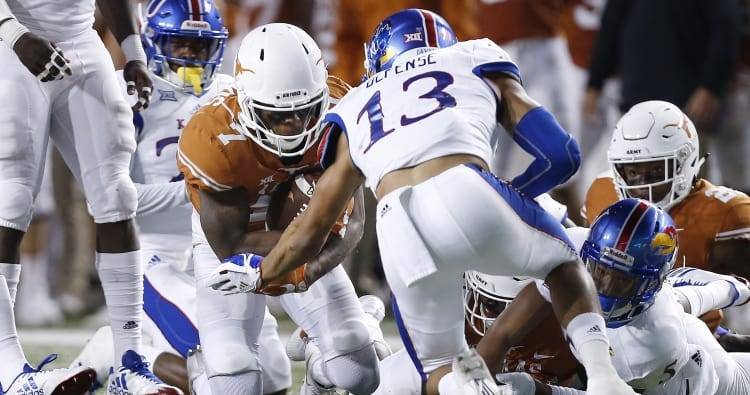 Brought off the bench less than a month ago, Antwuan Davis stepped onto Big 12’s medal stand on Monday.

Davis has been named the Big 12’s defensive player of the week. Davis joins Texas safety DeShon Elliott as Longhorns who have won that award this season. Elliott was the Big 12’s top defender following UT’s games against USC and Iowa State.

In this past weekend’s 42-27 win over Kansas, Elliott returned an interception 16 yards for a touchdown. He also intercepted a pass in the end zone, and his recovery of a fumbled punt return led to another Texas touchdown.

The interceptions were the first of Elliott’s career. The fifth-year senior from Bastrop was inserted into the starting line-up two weeks ago after nickelback P.J. Locke III suffered an ankle injury.

“I’m proud of him,” Elliott said on Saturday. “He always works hard. All of spring and fall camp he was injured and didn’t have a chance to play. Today he finally blossomed into the player I knew he could be and hopefully these next couple of games it doesn’t go away. ”

Tom Herman: There won’t be any motivation or focus issues in these final two games