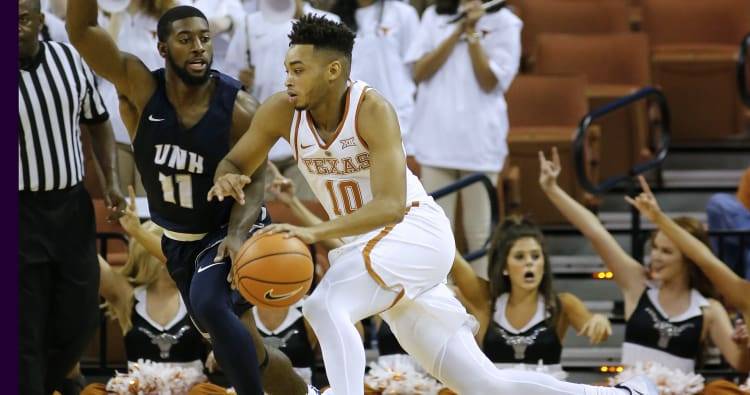 Hundreds of Texas fans showed up at the Erwin Center on Tuesday and found a nattily attired Mo Bamba sitting on the Longhorns’ bench. No Mo versus New Hampshire?

Nope. The 6-foot-11 center was held out after suffering a concussion on Sunday when he took an inadvertent elbow from Dylan Osetkowski in practice.

The school announced that Bamba would sit about an hour before facing the Wildcats.

As it turned out, the Horns would be just fine, winning 78-60 and moving to 2-0. Osetkowski had his second double-double in as many games. The beefy 6-foot-9 junior, with elbows of steel apparently, finished with 17 points and 14 rebounds.

The Longhorns led by 19 points with 6:29 remaining and had no problem putting the Wildcats (1-1) away. Five players finished in double figures as the Horns shot 48 percent overall despite struggling from 3-point range. Texas also got 22 points from its bench.

There’s lots to be excited about this season with all of UT’s newcomers. But don’t forget their veterans. Andrew Jones stated the second half with a steal and dunk en route to 16 points. Eric Davis Jr. tallied up 11 points. Kerwin Roach Jr. had a scintillating drive through traffic for a difficult left-handed layup. Roach finished with 12 points.

If Texas can get constant contributions from all three players all season long, plus numbers from its talented freshmen class, the Horns will be just fine.

Freshman Jericho Sims (eight points, four rebounds) is only getting better. He had a terrific sequence midway through the first half. Sims had one block, then another and then slapped the loose ball away to a teammate to start the fast break. Sims went the other way and caught a lob pass from Jones for an easy two-handed jam. It was an impressive transition from defense to offense that gave Texas a 23-17 lead.

Coach Shaka Smart never said his team has completely morphed into a solid 3-point shooting team. Asked in the preseason if his club could shoot, he simply said, “I hope.” This wasn’t one of those clip-and-save nights. Texas was 7 for 24 from 3-point range. But let’s look at Jacob Young’s numbers. The sophomore went 3 for 5 in the second half, giving him a huge shot of mojo.

The Horns are doing a solid job at ball protection early this season. Texas had just five turnovers in last Friday’s win over Northwestern State. The Horns had only one in the first half against the Wildcats when Osetkowski lost control of the ball just 14 seconds in the game.

Texas will practice the rest of the week and next face Lipscomb at 4 p.m. Saturday, a game time moved up to early in the afternoon. It’s the final tuneup before Texas heads to Portland, Ore., to face Butler and possibly Duke in the PK80 tournament on Thanksgiving weekend.

The post At the buzzer: Texas 78, New Hampshire 60 appeared first on Hook ‘Em.