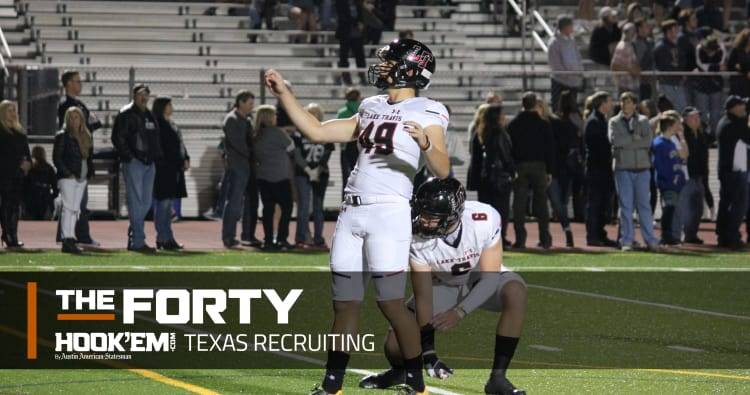 Cameron Dicker is ready to compete

There’s no denying Texas’ kicking woes. Tom Herman hoped to have those problems solved for 2017 and 2018 when he signed JUCO place kicker Joshua Rowland, but Rowland was relegated to the bench last Saturdayagainst Kansas.

Herman and the staff have no trust in the kicking game. It’s why the Longhorns go for it on fourth downs several times each game. It’s arguably why they didn’t escape the USC and Oklahoma State games with wins.

It needs to be fixed. Texas should beat most opponents with overwhelming skill. But that doesn’t mean the Longhorns won’t need a reliable kicker in tight games. Now the hopes rest on 2018 commit Cameron Dicker of Lake Travis High School.

Dicker is 10 for 12 on field goals this fall with a long of 53 yards. More than half of his 72 kickoffs have resulted in touchbacks, and while he won’t punt for Texas, he’s averaging nearly 40 yards per attempt.

Dicker said the plan is for him to redshirt next season. At least, that’s the plan right now.

“That was the plan at first, but if I need to compete right away, that’s what I’ll do,” Dicker said.

Dicker is familiar with Rowland. The two occasionally kick together off campus on weekends, Dicker said, and the high school senior doesn’t feel like talent is an issue for the current scholarship kicker on campus.

“Josh is a good kicker. He’s just having a down time right now,” Dicker said. “I’ve seen him make a bunch of field goals when we’re working together. He didn’t go to big schools, so the first couple of misses in front of that many people played with his mind, I think. As he gets over those things, he’ll be good.”

Dicker won’t have quite the same problem. He’s kicked for a Class 6A state championship team as a junior.

“I think it will help me having played in big games and for a program like Lake Travis,” he said. “But nothing can compare you for 100,000 fans.”

Kicking isn’t all about making field goals. Dicker also handles the punt and kickoff duties for Lake Travis. The Cavaliers are the defending Class 6A Division I state champions and head coach Hank Carter believes Dicker is one of the main reasons.

“He’s a weapon and doesn’t get enough credit for his punting,” Carter said. “We haven’t had to cover too many kicks. He’s a stud.”

Kicking is unlike anything else in football. Dicker likens his skill to playing golf. He describes the position as mental more than physical and relies on a clear head when attempting big kicks.

“I try not to think about anything other than making the kick,” Dicker said. “The best thing to do as a kicker is block everything out. The more thoughts going through your mind leading up to the kick, the harder it’ll be to execute.”

Dicker, a former soccer player, is a 6-1, 187-pound 3-star who’s ranked as the second-best prep kicker for the 2018 class, per the 247Sports composite. Dicker committed to the Longhorns on May 4 and is happy that his college career will lead him just down the street in Austin.

“It’s a dream come true and the perfect situation for me,” Dicker said. “My family and friends will be close to me and I feel like there is a good shot I can leave a mark at Texas and see where my career goes from there.”

Kicking is unique. It’s harder to add muscle or speed and notice a direct improvement on the football field. Instead of working to become stronger or kick the ball further, Dicker is more concerned with becoming more consistent in his technique.

“I notice a little more leg strength from my sophomore year to now, but not a ton,” he explained. “It’s slight stuff. My legs have gotten stronger, but I’ve improved the most because I’ve become more confident in what I do and that frees up my leg to kick as hard as I can.”

Lake Travis reached the state championship game in Dicker’s sophomore and junior years. The Cavaliers hope to get back there again this season. He’s enjoying the ride, even if football wasn’t his first sport of choice. That distinction falls to soccer.

“He’s a goofy kid because he’s a soccer guy,” Carter joked. “But, in seriousness, he’s truly perfect for us as a kicker. He’s great.”

Path to the Playoff: Weekend Results