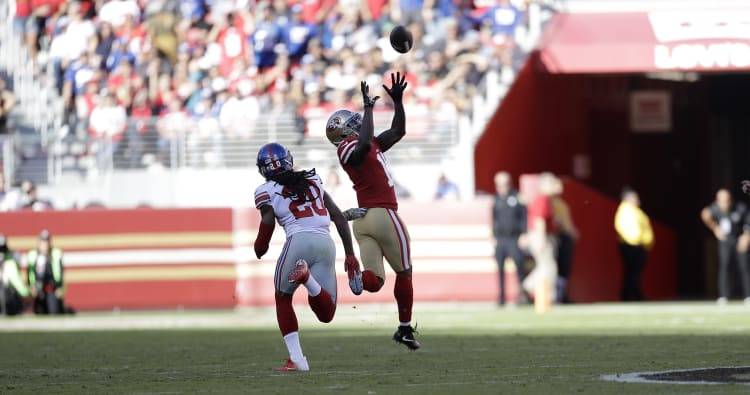 Marquise Goodwin had two touches in the 49ers’ first win of the season, a 31-21 victory over the Giants on Sunday. Goodwin had one carry for 18 yards and torched the Giants on an 83-yard touchdown catch. Goodwin became very emotional after the score. After getting behind the defense to make the catch, Goodwin shrugged off a tackler and strolled into the end zone while gesturing to the sky. Goodwin later shared with fans that he and his wife Morgan, a former Longhorns sprinter, had lost an infant son earlier in the day. He dropped to his knees after his score and his teammates surrounded him in support.

Goodwin’s touchdown wasn’t his only contribution of the day. He also sprung Garrett Celek with a block for another 49ers touchdown.

Garrett Celek gets a big block from @flashg88dwin then takes it from there. 47-yards to the end zone! #NYGvsSF pic.twitter.com/MHNwTkCmts

He was a bit shaken up on the play but walked off under his own power.

Alex Okafor and the New Orleans Saints stayed hot, defeating Buffalo 47-10. Okafor had four tackles and a sack in the Saints’ seventh straight win. He added a pass break up and hit the quarterback twice.

Quandre Diggs and the Lions topped the Browns 38-24 as the defensive back amassed six tackles. He was third on the team in tackles and hit the quarterback once in the win. Diggs nearly recorded his first sack of the season, but was a split second too late.

Brian Orakpo, LB, Titans—Orakpo had just one tackle, but he also contributed a sack and a forced fumble in the Titans’ 24-20 win over the Bengals.

Sam Acho, LB, Bears—Acho made four tackles and had half a sack in the Bears’ 23-16 loss to the Packers.

Hassan Ridgeway, DT, Colts—Ridgeway sacked the quarterback and made two tackles as the Colts hung tough, but eventually fell to the Steelers 20-17.

Jamaal Charles, RB, Broncos—Charles carried the ball eight times for 38 yards and his Broncos fell to the Patriots 41-16.

Brian Robison, DE, Vikings—Robison made four tackles and broke up a pass as the Vikings outlasted the Redskins 38-30.

Trey Hopkins, OG, Bengals—Hopkins and the Bengals fell to the Titans 24-20. The Bengals rushed 14 times for just 53 yards and scored. Hopkins played in 51 offensive snaps.

D’Onta Foreman, RB, Texans—Foreman rushed the ball 7 times for 18 yards in the 33-7 loss to the Rams.

Lamarr Houston, LB, Texans—Houston made three tackles and had a tackle for loss as the Texans struggled to slow the Rams offense.

Nick Rose, K, Redskins—Rose was 3-for-3 field goals, including a 55-yarder in the 38-30 loss to the Vikings. He connected on all three of his extra point attempts.

Phil Dawson, K, Cardinals—The oldest of the Longhorns in the NFL, Dawson was just 50 percent on extra points in Thursday’s 22-16 loss to the Seahawks. He did connect on a 43-yard field goal, however.

Roy Miller, DT, Chiefs—Miller found himself in a lot of trouble during the Chiefs’ bye week. He was arrested on domestic battery charges in Jacksonville, Fla. late last week and the Chiefs waived him on Monday, according to ESPN.

Colt McCoy, QB, Redskins—McCoy wasn’t called into action in the loss to the Vikings.

Malcom Brown, DT, Patriots—Brown has missed the Patriots’ last two games with an ankle injury. He hasn’t played since Week 7 against the Falcons.

Adrian Phillips, CB, Chargers—Phillips didn’t record a stat but he nearly saved the Chargers from a loss as he partially blocked Josh Lambo’s game-winning field goal in overtime. The ball had enough to get through the uprights, however.

Earl Thomas, S, Seahawks—Thomas missed Thursday’s win over the Cardinals due to a hamstring injury.

Malcolm Brown, RB, Rams—Brown sprained his MCL in Week 9 and missed the Rams win over the Texans in Week 10.

Derrick Johnson, LB, Chiefs—Johnson and the Chiefs were on bye in Week 10.

Justin Tucker, K, Ravens—Tucker and the Ravens were on bye in Week 10.

Marcus Johnson, WR, Eagles—Johnson and the Eagles were on bye in Week 10.

The post Longhorns in the NFL: Week 10 marred by inactives and off-field issues appeared first on Hook ‘Em.