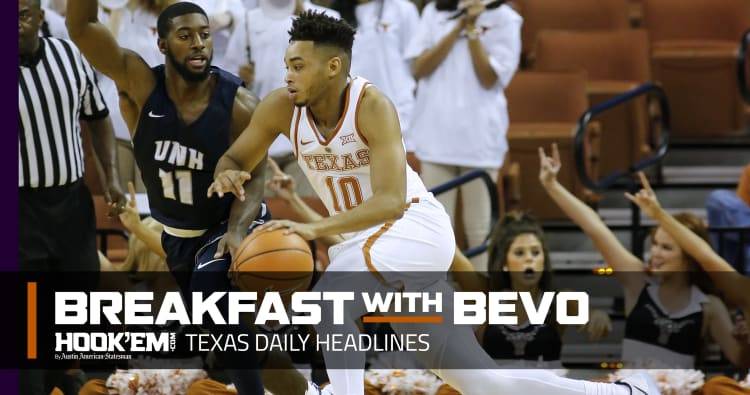 The Texas basketball team was without freshman center Mo Bamba as it easily defeated New Hampshire 78-60 on Tuesday night at the Erwin Center. The Longhorns moved to 2-0 with Dylan Osetkowski posting a second straight double-double. He scored 17 points and pulled down 14 rebounds. Five Longhorns scored in double digits while shooting 48 percent from the field. Texas next hosts Lipscomb on Saturday at 4 p.m.

When a team is 21-2 overall and 13-0 in conference play it’s hard to find many flaws. If the Longhorns volleyball team would like to improve something it’s their ability to earn service aces. Ranked just 327th in the nation in service aces, Texas has just 78 on the season. The Longhorns, ranked No. 2 in the AVCA national poll, take on Kansas Wednesday.

Cameron Dicker aims to be next Texas kicker

The Texas football coaching staff can’t trust the current kickers on the team. Joshua Rowland hasn’t worked out as a solution to the kicking woes. Lake Travis kicker Cameron Dicker is committed to Texas and will be its best bet at solving the problem. Dicker has missed just two field goals this season and has a long of 53 yards for the Cavaliers. He expected to redshirt next season, but the high school senior says he’s ready to compete.

Longhorns in the NFL: Week 10 marred by inactives and off-field issues