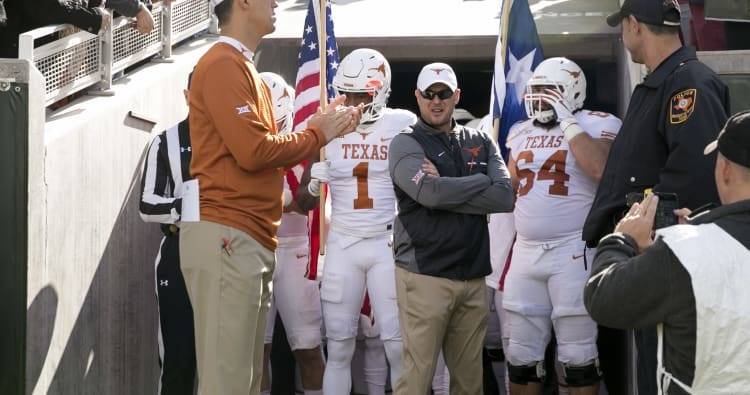 At this point, it’s fairly simple. If Texas makes a bowl game, the 2017 season will be considered progress. If the Longhorns don’t, then it’s a major disappointment.

Coach Tom Herman’s club is 5-5 overall and needs to beat West Virginia or Texas Tech to become bowl-eligible. The view here is that the Longhorns get it done, either by successfully navigating all those country roads or by clipping Kliff Kingsbury’s equally desperate crew.

If my inbox is any indication, most fans are now looking beyond the Shane Buechele vs. Sam Ehlinger debate. Not many are griping about the running game anymore, and the groans about the offensive line have slowed to a trickle.

Losing Holton Hill last week really took the steam out of some of you, it would appear. Hill was suspended for an undisclosed violation of team rules for the rest of the season. It’s unclear whether the junior will return for his senior year or jump into the NFL draft.

With two regular-season games left, it would appear some of you are wrestling with the question as to whether Herman was/is the right pick for the job.

Granted, the only reason some of you are blasting me about this topic is because the Longhorns are 5-5. This team has suffered some difficult injuries in all the wrong places. For example, UT could have absorbed injuries at receiver but not on the offensive line. Both quarterbacks have been hurt, too.

If we’re being honest, this defense has held up remarkably well despite being thin up front and not having a bevy of playmakers at linebackers. Junior safety DeShon Elliott is likely to land on some All-America teams, though.

The punting has been outstanding. The kicking is … whatever.

Herman and his staff are holding on to a terrific recruiting class, which should come to fruition during the December early signing period. A bowl game, a bowl win and a strong recruiting class? If Herman could nail all three, I don’t think I’d be getting too many emails like this:

As a follower of all the sports writers at the Statesman, and a Longhorn football fan since 1961, I am very upset over the faux coach, T. Herman. In my mind, he was and is, an opportunist that did well in Houston due primarily to having an excellent quarterback, and perhaps a better than average roster, especially on defense. He probably is an okay coach, but not great, and not the coach for Texas. He came here demanding a too high salary, and an upgrade of facilities before either was earned.

In all seriousness, he is VERY UNPROFESSIONAL! One might expect, or at least hope for more professionalism than that of a 15-year-old kid chewing bubble gum. After all, he is being paid $5 million+. What are we getting for our money? A bubble gum chewing loser. I think you guys need to mention this in an article.

Don’t hold anything back, Bob. Tell me how you really feel.

Let’s rewind the tape. Herman had two excellent years at Houston, posting a 22-4 record. That included a 6-0 mark against ranked teams. Say what you want, but I don’t remember anyone saying that Herman was doing it with smoke and mirrors. The biggest knock on him was that Houston had a tendency to sleepwalk through trap games, like Navy or SMU.

Herman did not make outrageous demands of the UT administration. He simply asked for the same deal Charlie Strong got — a guaranteed five-year contract. And the new coach always, always, always makes more money than the old coach. That’s why Herman’s first year is worth at least $5.25 million. And yes, he smartly got $10 million in improvements for the Moncrief-Neuhaus Athletic Center. Those were long overdue.

As for the gum, I like gum. If he was winning, it’d be just as quirky as Les Miles eating grass.

In my opinion, Herman is NOT the right guy for UT.  Even with all of his bluster & special coaching methods he can’t coach well enough to have a winning team.  This ship is sinking & it looks like Herman is on course to take the ship & entire crew down. Sadly something’s gone wrong.

I don’t think this ship is sinking. It’s simply navigating choppy waters. If it were sinking, we’d be hearing more grumbling out of the locker room about unhappy players. You simply don’t hear that right now, at least not that much. Even Armanti Foreman’s dad has quieted down.

It’s hard to deny this team is better than last year, despite what the record says. In retrospect, it’d been terrific for Herman if Texas could have beaten USC, Oklahoma or Oklahoma State, at least one of those. The whole season would be viewed differently.

Your coach bashing articles are getting old. I get the impression you thrive on these moments because you certainly jump on them even when it’s not the right moment. I’m honestly floored at some of the comments you’ve made lately.

I’m a lifelong Horns fan and have learned over the past 5 or 6 years to have patience. While it has been frustrating to watch the average Joe can see there is now a foundation being put in place by Tom Herman and his staff and that foundation I believe will serve and a very solid foundation to build on and will hold up for many years. Something Charlie Strong didn’t do. I invite you to take a step back and realize what and why the coaches are doing what they are doing instead of putting them on blast. Have a great day!

I would push back against the idea that anyone in the Austin media has engaged in “coach bashing.” And I stand by the idea that simply playing hard alone does not constitute success. Herman came here with high hopes and he fanned the flames in August. Not once did he tap the breaks and indicate this team could struggle. Of course, he couldn’t foresee the injuries, either.

Look, Texas football is like the Yankees or the Cowboys. It’s a national brand. It’s a school with its own television network, for goodness sake. Never lose sight of the fact that people come here to make a lot of money, play in big games and win at a high level. With that comes scrutiny.

It’s not my job to outright criticize the players. This isn’t pro football. But the coaches, the ones who make all the money, are fair game. Always fair game. That’s part of the deal, and they know it.

Against Kansas, the play calling was atrocious again. Roughly 70% of the passes were shallow crossing routes of less than 5 yards, or flanker screens. The one long ball was a touchdown. Buechele was the worse he’s been in two years. His timing was off and he kept missing receivers. Then there was that terrible Q4 pick he threw into double coverage.

The defense took a vacation, and was the worse it’s been since Maryland, allowing the worse offense in the conference their biggest game as Kansas had over 350 yards. If not for Kansas miscues, 2 picks and 1 fumble, Texas would have lost this game. Fact: with Sam at QB Texas has some semblance of an offense, without him Texas has no offense.

Offensive coordinator Tim Beck promised that we’d see some different things and we sure did. Those short crossing routes were a big help, I thought. Deploying Chris Warren III as a blocking fullback also helped. I’d like to think that Texas could have beaten Kansas straight up, even without a few Jayhawks turnovers. Heck, the only real reason UT lost to Kansas in 2016 was because of six turnovers. You give any team six freebies, and you’ll get beat.

I am on record saying it’s my belief that Ehlinger gives the offense more upside than Buechele. Ehlinger’s running ability trumps that of Buechele’s. But Buechele is probably more accurate, based on what we’ve seen. If you could put the two together, you’d have a heck of a player.

It won’t be surprising if we see both quarterbacks against West Virginia. And I’m talking a legitimate rotation, not this deal where Ehlinger comes in, throws a touchdown and then is never seen again until mop-up duty.

Becker missed a 44-yarder one foot to the left. I would think that Herman would give him another shot. I did not go to the game, but the play-by-play guy on the telecast, who is a moron, went apoplectic as he essentially blamed Becker for all of Rowland’s misses. 40 yards and in should be made. Once you get around 45 and longer, the ball has more time to drift wide. Place-kicking is not an exact science. Why is Nick Rose looking like Lou Groza for the Redskins now?

Rose is 7 for 8 on field goals with the Redskins so far this season. Good for him. Meanwhile, back at Texas, oh dear. On Sunday, I asked whether UT should purposely violate NCAA rules and get Lake Travis kicker Cameron Dicker to join the team now. Sigh. He can’t, though. Dicker, the nation’s No. 1-ranked kicking recruit, will join the team next season.

“Josh (Rowland) is a good kicker. He’s just having a down time right now,” Dicker told the American-Statesman. “I’ve seen him make a bunch of field goals when we’re working together. He didn’t go to big schools, so the first couple of misses in front of that many people played with his mind, I think. As he gets over those things, he’ll be good.”

The offense has been taking a lot of flack this season, but I wonder how many losses would be have been wins if all of those missed field goals would have been made. Momentum kills aside. It’s hard to imagine there has not been any experimentation with having Dickson try some field goals, at least in practice.

I do think we’ll see Mitchell Becker against West Virginia. He deserves another shot.

Now trying Dickson at kicker? That’s interesting. The Ray Guy Award candidate probably hasn’t spent much time kicking field goals, but who knows? Maybe he’s goofed around on the practice field with those guys. Still, it’s hard to see Herman sending the punter out there to try field goals. The coach would just prefer to go for it on fourth down instead.

The post The Whys of Texas: Fans are having second thoughts about Tom Herman? Already?! appeared first on Hook ‘Em.

Sound Off: Who have been the most fabulous freshmen in 2017 for Texas?