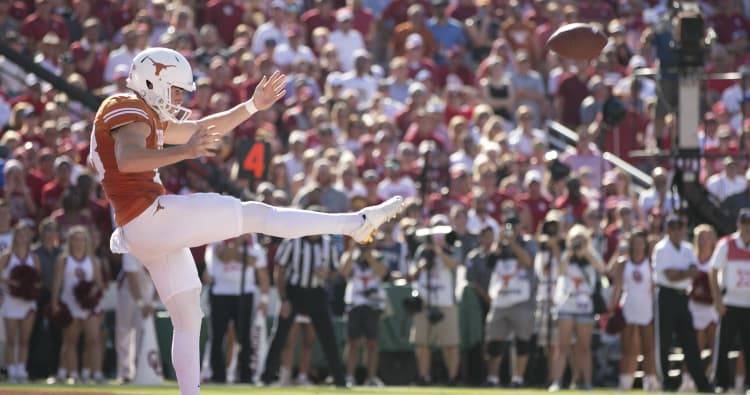 Texas coach Tom Herman may refuse to use Michael Dickson’s name, but the proprietors of the Ray Guy Award haven’t forgotten it.

Dickson was named a semifinalist for the Ray Guy Award on Thursday. The Ray Guy Award is given annually to the nation’s top punter, and this year’s award will be given out on Dec. 7. On Nov. 21, the field of 10 semifinalists will be narrowed down to three finalists.

During his junior year, Dickson is averaging a nation-leading 48.6 yards per punt. Only 15 of the Australian native’s 57 punts have been returned, and 21 have landed inside an opponent’s 20-yard-line.

Dickson launched a 76-yard kick against TCU on Nov. 4. He also tied his own single-game record for the Longhorns when he averaged 55.0 yards per kick against Oklahoma.

Dickson became UT’s first-ever finalist for the Ray Guy Award in 2016, and his statistics are better this season. Last year, Dickson averaged a school-record 47.4 yards per punt.

The Week 12 guide to watching Texas commits in playoff action