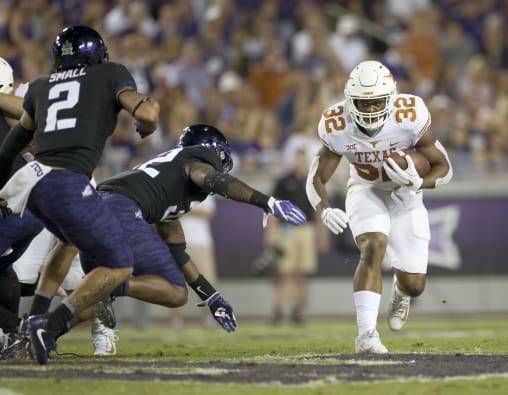 Daniel Young thinks his Spring Westfield football team never took a road trip longer than 170 miles, when his team traveled to Georgetown for a playoff game. And the rowdiest opposing fans? Those from Spring, of course, Westfield’s big rival.

Young, now a freshman running back at Texas, is adjusting to longer trips like California and Iowa. And he’s encountered wilder crowds than those rooting for Spring High. On Saturday, the Longhorns head east to face a West Virginia fan base that junior defensive end/linebacker Breckyn Hager recalled — perhaps jokingly — as being “a bunch of hillbillies drinking moonshine.”

“I’m looking forward to it; it’s a new experience,” Young said. “I’m just prepared for anything. You’ve got to be prepared for chaos. You never know how it’s going to be, so you’ve got to prepare for the worst.”

Young likely will catch the eye of Mountaineers fans. The 6-foot, 220-pound back has been Texas’ feature back the last two games against TCU and Kansas, with 33 of the team’s 47 non-quarterback carries. He also ran seven times for 60 yards and a touchdown in a 38-7 win over Baylor on Oct. 28.

Young is averaging 4.2 yards a carry and has gotten the chance to showcase why Texas coach Tom Herman called him “the steal of the class” on signing day. Young, who was a three-star recruit, originally committed to Houston when Herman was coaching the Cougars.

“One of the things with Danny, what he’s doing right now is he’s getting the tough yards,” offensive coordinator Tim Beck said. “You watch: When he gets hit in the pile, the pile moves.”

The emergence of Young and fellow freshman Toneil Carter has pushed veterans like Chris Warren III and Kyle Porter into different roles. Carter had solid showings at Iowa State and Baylor, but missed the 24-7 loss at TCU with a head injury. He returned last week and ran for 34 yards and a touchdown on only three carries.

Beck said the freshmen backs still have room to grow. “Ask coach (Stan) Drayton,” Beck said, “he pulls his hair out sometimes because they still make mistakes. They’re still young pups.” Learning all of Texas’ pass protections is an issue, Beck said, and Carter must work on holding onto the ball.

Still, the freshmen have provided the offense with what Young called a 1-2 punch. He’s also heard someone refer to him and the 205-pound Carter as “Thunder and Lightning.”

“I’ll be the thunder, he’ll be the lightning,” Young said.

Carter and Young were part of Herman’s first signing class, a much-panned transitional group that ranked 25th nationally. But several of the UT newcomers have made an impact this year, especially on offense. Offensive lineman Derek Kerstetter, tight end Cade Brewer and quarterback Sam Ehlinger all have made multiple starts.

“I feel like our class will be really good,” Young said. “You can’t listen to all the media and stuff. It’s good sometimes, but sometimes it can be bad, so you’ve just got to focus on you and your growth and progression. Just keep everything moving and worry about your own.”

The post Freshmen Daniel Young, Toneil Carter set for Morgantown: ‘You’ve got to be prepared for chaos’ appeared first on Hook ‘Em.