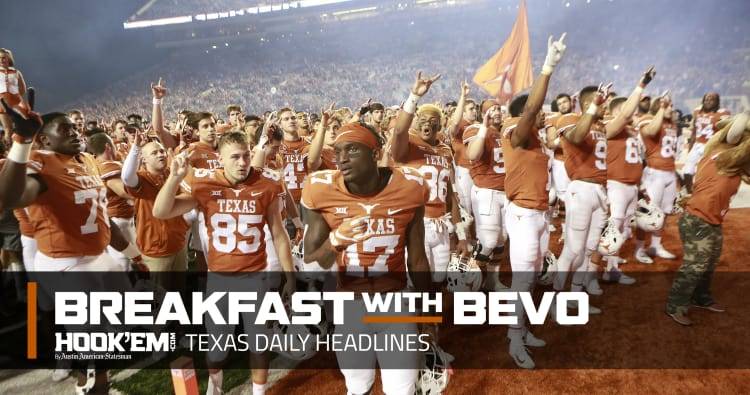 Texas beat writers Danny Davis and Brian Davis recap the Texas-Kansas game and preview the contest with West Virginia in this edition of Sound Off. They also talk about which freshman has been the most impressive this year.

The Whys of Texas: Tom Herman not the right guy?

Brian Davis received a lot of comments from readers concerning Tom Herman in the edition this week of the Whys of Texas. Some questioned whether or not Herman is even the right man for the job. Others, however, are on board with Herman and feel he’s getting unfairly treated by the media. Readers also had something to say about the offensive play calling and the kicking game.

The best prospect in the state of Texas has decided to play for the Kansas Jayhawks instead of the Longhorns. Grimes, a 5-star guard with The Woodlands College Park, made the announcement on Wednesday. The commitment to the Jayhawks is a disappointment for Texas, but the Longhorns are still expected to finish in the top 10 in 2018’s recruiting rankings.

Brennan Eagles was named a U.S. Army All-American on Monday. Longhorns recruiting reporter Mike Craven writes in The Forty that more than half of the Texas 2018 recruiting class will participate in postseason all-star games. Eagles is a 4-star wide receiver at Alief Taylor and is in the debate for top receiver in the state. He received nearly 30 offers from FBS schools throughout the recruiting process and offers a mix of size, strength and speed.

A group of walk-on football players at Texas has started a new web series called “Walkee Talkee.” In the first edition of the series, walk-on running back Trenton Hafley of Burnet High School interviews Malik Jefferson.

Path to the Playoff: National Rankings