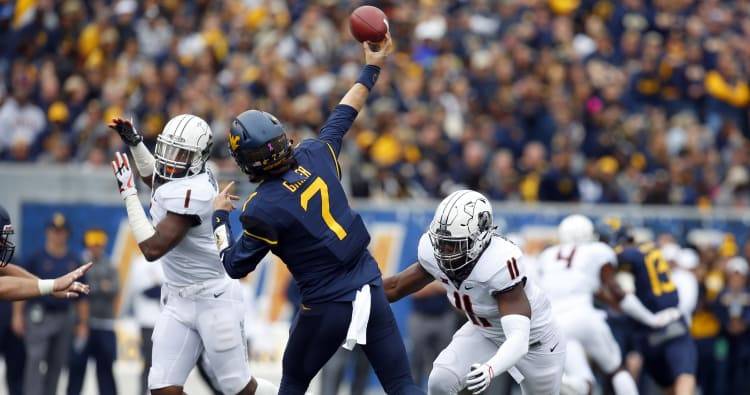 This week’s notable number is 38.

Thirty-eight is the number worn by senior Mitchell Becker, who will handle place-kicking against West Virginia, and redshirting defensive back Kobe Boyce. Freshman Toneil Carter’s season-high run is a 38-yard gain, and he leads all UT running backs with his 5.4 yards per carry. Jamaal Charles — the fourth-leading rusher in UT history — played in 38 games from 2005-07.

One year after setting the FBS single-season efficiency record at 196.4, Mayfield leads the country with a mark of 202.1. Grier ranks seventh with a passing efficiency of 163.5. As we explained last year, you calculate passing efficiency by taking one’s yards (x 8.4) + touchdowns (x 330) + completions (x 100) – interceptions (x 200) and then dividing that total by the pass attempts.

“If anything, I compare him to Baker Mayfield,” Texas defensive tackle Poona Ford said. “He can run around a little bit. We are just going to prepare for that.”

This season, Mayfield’s 3,559 passing yards and Grier’s 3,440 passing yards have been bettered only by the 3,690 yards thrown by Oklahoma State’s Mason Rudolph. Their second- and third-place rankings are reversed when it comes to touchdown passes (Grier’s 34 to Mayfield’s 31, which trail only Missouri quarterback Drew Lock’s 35).

Grier, however, has thrown 12 interceptions to Mayfield’s five. The Sooners quarterback’s completion percentage of 71.2 is seven points higher. Mayfield is also considered by many to be the front-runner for the Heisman Trophy.

UT linebacker Malik Jefferson agreed with Ford’s comparison, saying that Grier was shifty, strong and “can throw the ball very well.” Texas defensive end Breckyn Hager even went as far as to say, “I like Will a little better.”

“Baker’s just different because of his personality,” Orlando said. “In terms of skill level, there are some similarities. I’ve seen Baker for three years. From my standpoint, the one thing I think he can do a good job of is keeping plays alive and being very accurate. Not to take anything away from Grier, but Baker Mayfield is Baker Mayfield.”

In Oklahoma’s 29-24 win on Oct. 14, Mayfield threw for 302 yards, two touchdowns and one interception. An Austin native, he has started four times against Texas since the start of the 2013 season. This, though, will be the Longhorns’ first look at Grier, a redshirt junior who began his college career at Florida.

Grier has been held under 300 passing yards by only one team this season. Last year, 41 teams posted better passing numbers than West Virginia (257.2 yards per game). The Grier-led Mountaineers are now averaging 352.1 yards per game through the air, which is the nation’s fifth-best total and would beat a school record of 346.8 that was set in 2011.

“I think this offense that we’re going against is real special,” Hager said. “I like Grier, he’s a great quarterback. I think he’s one of the greater quarterbacks in the Big 12. It’ll be a good challenge for us.”

The post Texas’ notable number: Comparing Will Grier to Baker Mayfield — and the number 38 appeared first on Hook ‘Em.