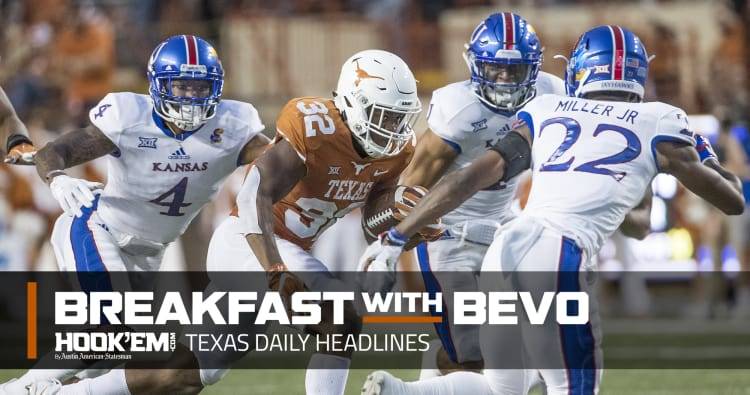 Daniel Young and Toneil Carter weren’t expected to be the feature running backs when the season started. As the Longhorns push for bowl eligibility, both freshman have taken on larger roles. While Young has rushed for tough yards for Texas, Carter flashed earlier in the season against Iowa State and Baylor. Upon returning from a head injury, Carter also scored in the win over Kansas. Young says he’s ready for anything this week against West Virginia.

A win would clinch bowl eligibility, but American-Statesman columnist Cedric Golden says the Longhorns aren’t likely to get that win this week. Morgantown, W.Va., is one of the toughest places to play in the Big 12, says Golden. Winning a game to give the seniors a shot at a bowl game may come down to the wire. Saturday brings a tough road test that these Longhorns may not be ready to pass.

In the edition this week of On Second Thought, American-Statesman columnists Cedric Golden and Kirk Bohls talk with West Virginia football coach Dana Holgorsen. The duo talk about Texas’ tough road test against the Mountaineers before taking a look at the Texas high school football playoff picture. American-Statesman reporter Rick Cantu joins Golden and Bohls to offer a playoff primer.

Texas punter Michael Dickson is one of ten Ray Guy semifinalists, the Augusta Sports Council announced on Thursday. The council will narrow the semifinalists down to three finalists on Nov. 21 before the winner is announced on Dec. 7. Dickson is averaging 48.6 yards per punt to lead the nation. He has a 76-yarder to his credit this month.

Cornerback Josh Thompson will miss the Saturday game with the Mountaineers. The freshman won’t make the trip to Morgantown because of a head injury suffered in practice Tuesday. On the bright side, linebacker Gary Johnson will play after suffering a neck injury against Kansas.

The post Texas RBs ‘ready for anything’ against West Virginia as Longhorns seek bowl eligibility appeared first on Hook ‘Em.