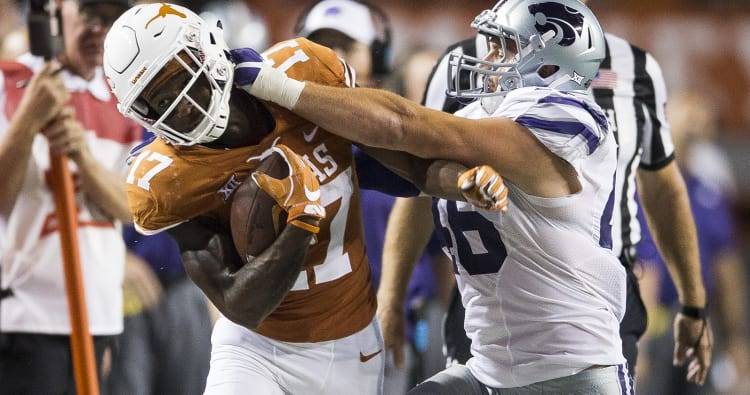 1. Will Texas’ depleted secondary hold up?

Cornerback Holton Hill is suspended. Backup cornerback Josh Thompson has been in concussion protocol this week. And nickel back P.J. Locke III is out with an ankle injury. Texas ranks 102nd in the country in passing defense, allowing 252.3 yards per game. That’s also fourth-best in the Big 12. The secondary will get tested — West Virginia’s Gary Jennings already has 82 catches, David Sills V leads the country with 18 touchdown catches and Ka’raun White has 10 touchdowns.

2. Will Texas keep going for it on fourth down?

Junior college transfer Joshua Rowland went 7 of 14 on field goal attempts before getting replaced last week by Mitchell Becker, who missed a 44-yard try in his only attempt. After that miss, Texas coach Tom Herman decided to go for it on all five of the fourth downs the Longhorns faced inside Kansas’ 40-yard line. Texas converted three of those five fourth downs. The Longhorns’ fourth-down conversion rate is 40.7 percent, which ranks 104th in the country. But will Texas have a choice if the kicker can’t be trusted?

3. Will Reggie Hemphill-Mapps make an impact?

Texas’ redshirt freshman is only six weeks removed from his 12-catch performance against Kansas State — the fourth-best total in school history. But Hemphill-Mapps suffered a knee injury two weeks later; he didn’t miss any games and is still listed as an option to start, but Texas’ second-leading receiver has been a non-factor recently. Over his last three games, he’s had one catch and has returned four punts.

4. Will Texas pick up a critical road win?

Earlier this week, Texas linebacker Malik Jefferson was asked about his most memorable moments in a road game. The third-year starter had to think for a few seconds about an answer, but he eventually settled on last year’s win at Texas Tech. Texas is only 5-12 away from Royal-Memorial Stadium since the start of the 2015 season. In that same span, West Virginia has gone 16-3 at Milan Puskar Stadium, including a 38-20 win over the Longhorns in 2015, the last time they played in Morgantown.

Texas’ notable number: Comparing Will Grier to Baker Mayfield — and the number 38