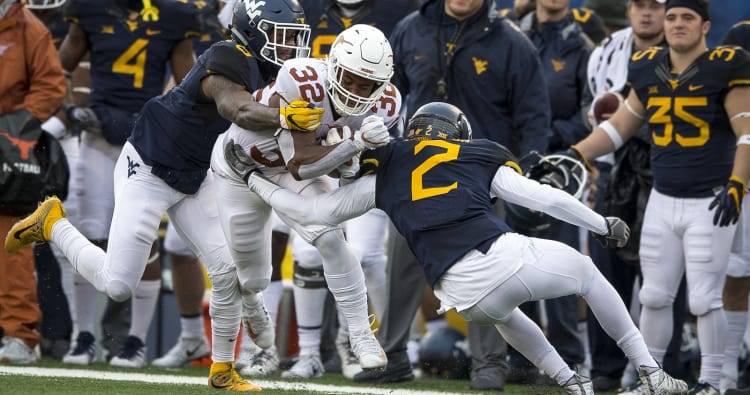 The Longhorns are 3 1/2-point underdogs today.

It’s a classic case of so far, so good for Texas. It’s quite rainy, which may be impacting West Virginia’s pass-happy offense. The Mountaineers lost quarterback Will Grier to a finger injury. There’s been a goal-line stand. Sam Ehlinger didn’t start but has provided a lot of electricity for Texas. The defense definitely made the road trip and Connor Williams is back.

West Virginia hasn’t been shut out in the first half since October 2016, against Kansas State. And don’t forget that the Mountaineers have gone scoreless in the second half in each of the last two weeks.

1. Let’s start with the play of the day.

On third-and-goal from Texas’ 1, Grier faked a handoff and kept it on a bootleg to the left. Diving for the end zone, Brandon Jones hit him right at the pylon. Jones’ hit dislodged the ball just before it broke the plane; it was ruled a fumble out of the end zone and a touchback, giving the ball back to Texas. And Grier landed awkwardly and dislocated the middle finger of his throwing hand — as he jogged back to the sideline, he flashed his hand outright and that finger was heading the other direction, pointing 45 degrees another way.

Texas took over at the 20. Grier headed to the locker room.

Jones’ hit forced the fumble and saved the touchdown, but DeShon Elliott saved a touchdown first with a tackle of Justin Crawford at the 1, after a 9-yard gain. And Davante Davis stopped Crawford for no gain on the second-down play before the fumble.

If Elliott and Davis don’t make those plays, Jones can’t make his.

2. High points for the Horns?

Williams is back, and he made an immediate impact: A knockdown block on Texas’ first play.

The running backs have shown a bit of flash. Daniel Young had a 22-yard run that was called back on a Williams holding penalty, and had a 10-yarder before that. He’s also caught three passes. Warren caught a 20-yard touchdown. Kyle Porter had an 11-yard run.

Jason Hall blocked a third-down pass at the line, forcing a punt in the second quarter.

John Burt dropped a pass that would’ve been a first down on third-and-15. The ball hit him in the numbers and he wasn’t even on the move.

Davante Davis was called for an unsportsmanlike conduct penalty on a tackle of Ka’Raun White. Davis wrapped him up and threw him to the ground. Tom Herman didn’t like the call.

And Patrick Vahe — the only offensive lineman that has started every game — left with an injury in the first quarter. He was replaced at left guard by Alex Anderson initially; on the next series, Terrell Cuney took over at left guard from center, and Zach Shackelford replaced Cuney at center.

3. Texas has had six drives. Here’s how they’ve played out:

The post It’s halftime, and Texas is shutting out West Virginia, 14-0 appeared first on Hook ‘Em.