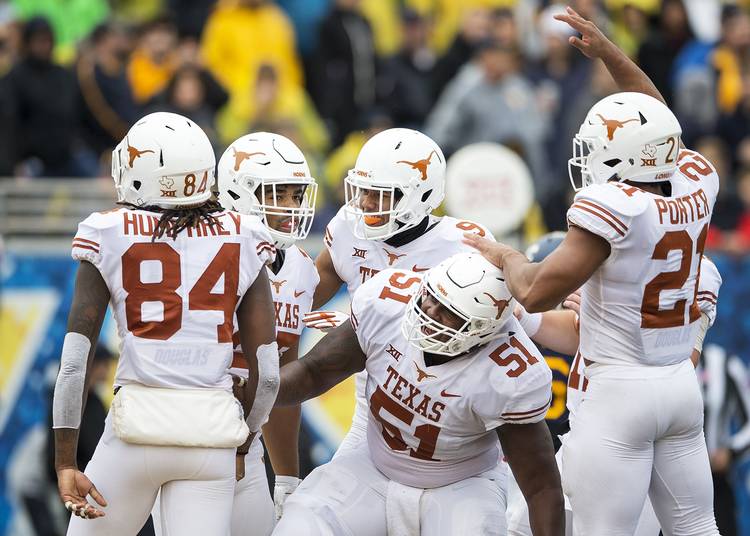 It’s over at Puskar Milan Stadium in Morgantown, W.V., and Texas has knocked off West Virginia, 28-14.

With their sixth win, the Longhorns will play in a bowl game for the first time since 2014, Charlie Strong’s first season. That was the offensive no-show loss to Arkansas in the Texas Bowl.

In short, things couldn’t have worked out better for the Longhorns. The rains in Morgantown had an impact on the West Virginia offense, though probably not as much as the Mountaineers losing their starting quarterback early. Texas’ defense certainly made the road trip. There was a big goal-line stand that ended with Will Grier suffering a game-ending finger injury and turning a touchdown into a fumble/touchback. And perhaps an even bigger third-down fumble thanks to Malcolm Roach and Gary Johnson that Chris Nelson recovered inside the 5-yard line, turning a tightening 21-14 lead into a 28-14 advantage with five minutes left. Sam Ehlinger was electric in the first half but then reminded us he’s a freshman in the second. The running game had some moments and Connor Williams’ return was a big lift.

It’s easy to point to the loss of Grier — one of the country’s top quarterbacks and the driver of the West Virginia offense — as the biggest reason. Perhaps because it was. The Mountaineers had some chunk plays but had problems producing drives. But certainly the WVU offense looked to be neutered without him.

The last regular-season game, on the day after Thanksgiving — Texas vs. Texas Tech, 7 p.m. next Friday at Royal-Memorial Stadium. It’ll be televised by Fox.

How it all happened


Advertisement
Texas 0, West Virginia 0. Shane Buechele and Sam Ehlinger both saw playing time, but two penalties and a John Hurt drop derailed the Longhorns’ offense. West Virginia was held to 98 yards, but the Mountaineers were inches away from scoring. A replay overturned a Justin Crawford touchdown run, then Will Grier lost the fumble while trying to cross the goal line. The play was a costly one for the Mountaineers: Texas was awarded a touchback and Grier left the game with an injured middle finger to his throwing hand.
Second quarter

Halftime: Texas 14, West Virginia 0. Buechele remained on the sideline as Ehlinger took control of the Texas offense. The Longhorns’ two touchdown drives featured highlight plays from the freshman — an 8-yard run on fourth-and-2, a 17-yard scramble on third-and-9 and a 23-yard catch from a Jerrod Heard receiver pass. The two scores were caught by Kendall Moore (his first catch as a Longhorn) and Chris Warren III, who has converted into a blocking back role. It was the first time West Virginia’s been shut out in a half since October 2016.
Texas: Kendall Moore 4-yard pass from Sam Ehlinger (Mitchell Becker kick, 10:55)

Texas 21, West Virginia 7. The Mountaineers kept within striking distance thanks to a critical mistake by Ehlinger, who threw an ill-advised pass while going down on a sack. It was picked off by Kenny Robinson, who returned it for a 94-yard touchdown (the fourth-longest in WVU history). But Texas got that touchdown back on Kyle Porter’s fourth score of the season.

Final: Texas 28, West Virginia 14. Texas’ defense enjoyed one of its best days of the season. Two big plays on the same drive saved touchdowns — a Gary Johnson hurry that forced an overthrow in the end zone and, two plays later, a DeShon Elliott pass breakup in the end zone on fourth down — after WVU got to Texas’ 25. Texas’ offense. WVU later closed to within a touchdown, but a big fumble recovery inside WVU’s 5-yard line helped Daniel Young put the game away.

1. Ehlinger came off the bench and looked super, directing Texas on an 11-play, 91-yard touchdown drive in the first quarter and then a 10-play, 87-yard touchdown drive on his next series. He evaded a sack and turned a third-and-9 into a 17-yard scramble. He found Reggie Hemphill-Mapps for a 50-yard pass. He took a receiver throw from Jerrod Heard for a 23-yard gain. He even impressed as a lead blocker on a Hemphill-Mapps reverse play.

But he also threw an ill-advised floater toward the end zone that Kenny Robinson picked off and returned 94 yards for a pick-six. And he fumbled in the backfield, though he recovered it. And he wasn’t as electric in the second half, as five of the Longhorns’ first six drives included four punts and the pick-six.

Connor Williams was back. And he definitely impacted the offense. Some of Texas’ best plays came on the left side of the field. He had a big pancake block on Texas’ first play of the game.

DeShon Elliott saved two touchdowns, one on goal-line tackle of Justin Crawford on the front end of that goal-line stand, the other on a fourth-down pass breakup in the end zone in the second half.

Jason Hall blocked a third-down pass that forced a punt in the second quarter. And he had the hit of the day on a pass breakup in the third quarter. That also forced a punt.

John Burt dropped a pass that would’ve gone for a first down on third-and-15. It hit him right in the numbers and he wasn’t even on the move.

Davante Davis was called for an unsportsmanlike conduct penalty on a tackle of Ka’Raun White. He wrapped White up and then threw him to the ground. Tom Herman didn’t like the call.

Patrick Vahe — the only offensive lineman that has started every game — left with an injury in the first quarter. He was replaced at left guard by Patrick Vahe. Terrell Cuney shifted over to left guard from center, and Zach Shackelford replaced Cuney at center.

On the first game Texas got Williams back, the Longhorns had to reconfigure the line again.

And Breckyn Hager was ejected from the game in the fourth quarter on a roughing the passer penalty that also included a targeting call. The play was reviewed; Hager complained that the left tackle had pulled him into the quarterback because of a facemask penalty that wasn’t called. Replays certainly showed the facemask but officials ruled he still had targeted Chugonov on the hit.

The ejection means Hager also will miss the first half of Friday’s Texas Tech game. He left to a chorus of boos from the Morgantown crowd. He and WVU fans have a history.

The Longhorns had 13 drives, splitting their first four series between Shane Buechele, who started, and Ehlinger, who took control. Here’s how those Texas drives played out.