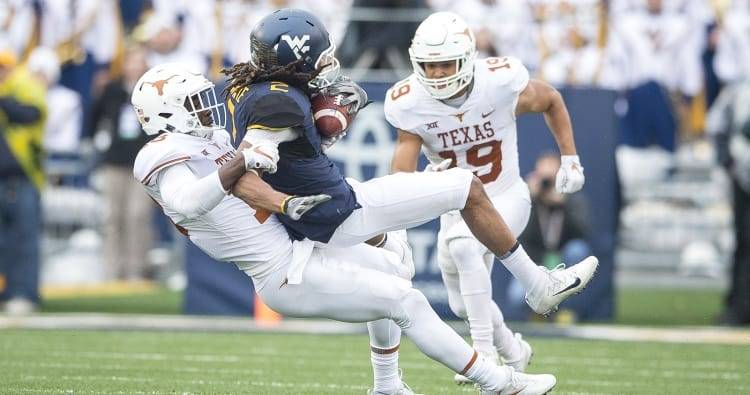 MORGANTOWN, W.Va. — If Davante Davis was grading himself over the past two weeks, he’d give himself a “C.”

For a second straight week, he started at cornerback in place of the suspended Holton Hill in Texas’ 28-14 win over West Virginia. Davis’ seven tackles tied for the team lead in tackles and he broke up a pass. After the game, he was critical of the 12-yard touchdown pass he allowed to West Virginia receiver Ka’Raun White.

In Davis’ grade book, an “A” is impossible since “nobody’s perfect, so you’ll never get an ‘A’ performance.” A “B” is obtainable, though.

“Just do your job,” said Davis, who analyzed that the allowed touchdown pass was a fixable mistake.

A junior from Miami, Davis started nine times over his first two seasons. Davis, though, drew the ire of his new coaching staff. Texas coach Tom Herman said in August that Davis needed “to continue to earn our trust,” and he was a role player ahead of Hill’s suspension.

Davis, though, said Saturday that his coaches didn’t give up on him. UT safety DeShon Elliott expressed confidence in him after the victory.

“My freshman year, he was our starting corner. I feel like he can still be a starting corner,” Elliott said. “They made one play, but plays get made. I’m proud of the way Davante played, and I’m pretty sure he’s going to play well the rest of the year.”

Another Morgantown memory: Defensive end Breckyn Hager was ejected in the fourth quarter after a replay confirmed he had committed targeting against West Virginia quarterback Chris Chugunov.

By rule, Hager will miss the first half of next week’s game against Texas Tech.

As he was led off the field, Hager flashed the “Hook ’em” sign. Earlier in the week, he made headlines when he recalled his 2015 trip to Morgantown. Of the West Virginia fans, Hager said: “It was a bunch of hillbillies drinking moonshine. I remember looking up, seeing someone with no teeth singing. I was all mad, about to cry, trying to block all of that stuff out and get to the locker room.”

Sandwiched in between those comments and his ejection, Hager recorded one tackle. West Virginia lost a rushing yard on that play.

Award watch: Michael Dickson punted seven times. He averaged 43.0 yards per punt with a long of 59. His best kick, however, may have been a 35-yarder that Kris Boyd downed at the West Virginia 4 with 7:26 left in the game.

Five plays later, defensive lineman Chris Nelson pounced on a Chugunov fumble at the Mountaineer’ 6. That set up a game-clinching touchdown run by Daniel Young.

Dickson was leading the nation with his 48.6 yards-per-punt average. On Thursday, he was named a semifinalist for the Ray Guy Award.

The post Texas notebook: Davante Davis gives himself a C, but Longhorns ace their test appeared first on Hook ‘Em.

Welcome back, Connor: Williams returns to prove he ‘hasn’t lost a step’

Texas 28, West Virginia 14: Longhorns are back in the bowl business after road win