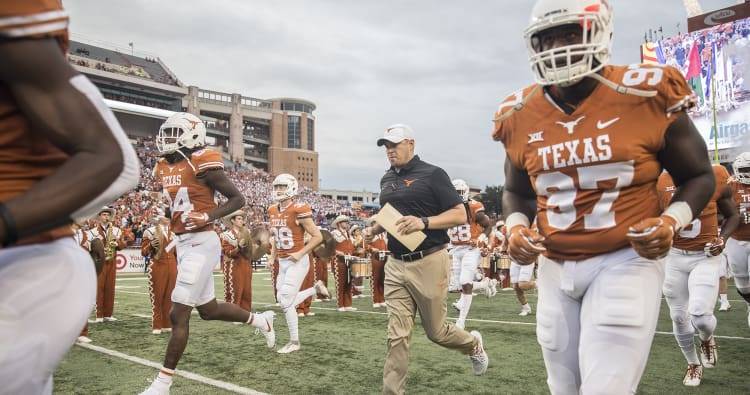 With two games left, Texas needs to win one of them to secure a spot in a bowl game. First up is the last road trip of the regular season to take on West Virginia.

The Mountaineers (7-3, 5-2 Big 12) present a stiff test for the middling Longhorns (5-5, 4-3), but a win would be characterized as a huge step in proving the program has improved in the first year under head coach Tom Herman.

West Virginia is 4-1 at home this season and has won four of its past five games overall. Coach Dana Holgorsen always has his team ready to play when bumping up against Texas.

Weather: The forecast calls for a temperature of 53 degrees at kickoff with a 35 percent chance of rain and wind 12 miles per hour out of the south-southwest.

The line: West Virginia is a 3 ½-point favorite to beat Texas.

Which TV channel is Texas-West Virginia on?

The game between Texas and West Virginia in Week 12 is on ESPN. Beth Mowins (play-by-play), Anthony Becht (analyst) and Rocky Boiman (sideline) will be the announcers.

How can I watch the Texas-West Virginia game online?

The game between Texas and West Virginia will be streamed live on WatchESPN.com and via the ESPN app. You can access the broadcast with a cable subscription login.

How can I listen to the Texas-West Virginia game on the radio?

The Texas-West Virginia game in Week 12 will air live on the Longhorn IMG Radio Network. In Austin, the local radio affiliate is 104.9 The Horn. A full list of Longhorns radio affiliates can be found here, or you can click the play button below to listen online.

For most of the season, the Texas offense has spun its wheels while the defense gives it ample opportunities to win. Last week, the defense gave up 17 points to Kansas in the first half and allowed the Jayhawks to stick around despite a solid offensive showing. When the defense picked things up in the second half, the offense again went dormant. That kind of inconsistency won’t fly in Morgantown.

West Virginia quarterback Will Grier leads one of the most dynamic attacks in the country. Unfortunately — or perhaps fortunately for Texas — it is also one of the most turnover prone. In the past three weeks, the Mountaineers have committed 10 turnovers. Grier has thrown 12 interceptions this season. The UT defense has 13 interceptions, including six by safety DeShon Elliott.

Earlier this week, Herman said that he expected All-American left tackle Connor Williams to return to action this week. It is unknown how much Williams might play, but any participation will be a welcome sight for Texas fans. Injuries have decimated the UT offensive line and made for a difficult season in the run game. If Williams can contribute moving forward, that part of the offense should instantly improve.

Texas’ notable number: Comparing Will Grier to Baker Mayfield — and the number 38

The Eyes of Texas: 3 Mountaineers the Horns will be watching