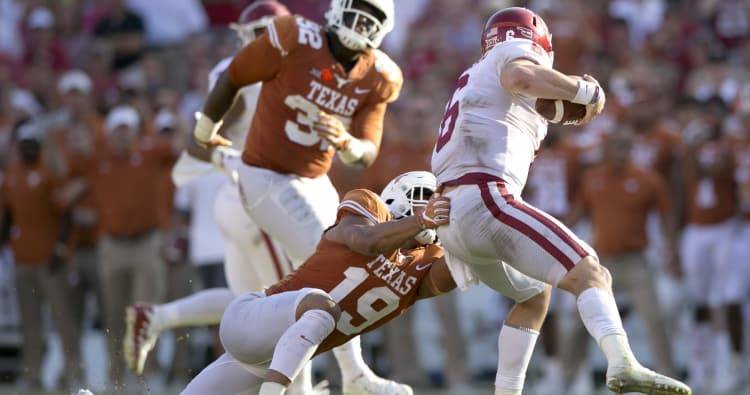 A video review added insult to injury for West Virginia quarterback Will Grier, but it all happened because of the effort by Texas safety Brandon Jones.

Jones caused Grier to fumble as he stretched toward the end zone late in the first quarter. The play was originally ruled a touchdown, but replays showed the ball pop out of Grier’s hands and squirt out of the end zone for a touchback.

But … and here’s where you should look away if you have a weak stomach … the ball wasn’t the only thing that popped out of Grier’s hand. The quarterback was seen prematurely celebrating the touchdown with a finger that didn’t look how it should.

Again: You should really look away now.

#WestVirginia QB Will Grier reacts to a dislocated finger like we all should! pic.twitter.com/jgLqgNmcWK

Will Grier just walked off the field with a sideways finger and shook it off like it was no big deal.

Seeing Will Grier’s finger after that play pic.twitter.com/e2T0cOay97

Now, Will Grier can’t even show people what West Virginia looks like using his right hand.

Or…we now have to get rid of the northern panhandle. Not a total loss. #WVU

Look at this cute cat instead of Will Grier’s finger. Texas got the touchback. pic.twitter.com/Uhbuy5nq8w

It’s halftime, and Texas is shutting out West Virginia, 14-0