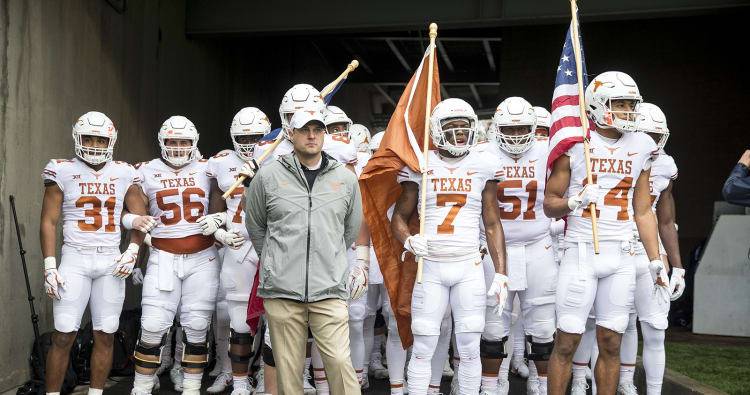 Texas accomplished one of its season goals on Saturday, claiming bowl eligibility for the first time since 2014 with a 28-14 win at West Virginia.

The Longhorns (6-5, 5-3 Big 12) will play in the postseason in their year under coach Tom Herman. After the game, Herman addressed the media in his postgame press conference. Here is some of what he had to say.

On return of LT Connor Williams:

“When we have Connor Williams that makes a difference in the run game. Hats off to Tim Beck and the offensive staff.”

On injury to LG Patrick Vahe, who Herman said suffered a sprained MCL:

“He’s played his tail off for us for 11 straight starts and to see him go down was a little crushing.”

On feeling in locker room after game:

“It was fantastic. These guys, the smiles on their faces, we know we’ve got one left but this was a big one.”

On play of QB Sam Ehlinger:

“He’s tough. He’s a competitor. He gives us a dimension in the run game. … We knew it would be difficult to throw against this defense. Sam gives us that (running) element.”

On pick-six thrown by Ehlinger:

“That’s a kid probably trying too hard. I think he thought he could throw it away, but as the saying goes ‘You’ve got to know when the journey is over.’”

On how team overcame adversity throughout season: