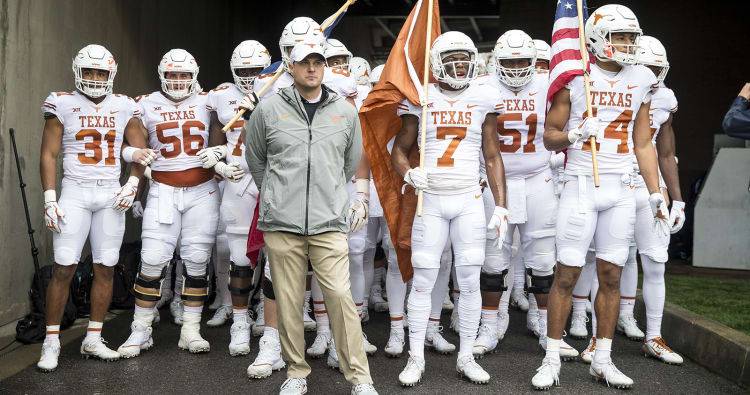 For the first time since Charlie Strong’s debut season in Austin, the Texas Longhorns are going bowling.

The Longhorns entered their Week 12 slate on the road against a ranked West Virginia squad and faced with the fear of falling back below .500, Texas did something it hasn’t done since 2014 — reached bowl eligibility.

With West Virginia and its potent offense largely devoid of Will Grier after the junior gunslinger broke his finger in the first quarter, the Sam Ehlinger-led Longhorns put forth a well-rounded effort e route to a 28-14 victory. Texas’ reward, as detailed by SB Nation in its latest bowl projections, is a meeting with Mississippi State in the Texas Bowl.

The last time the longhorns went bowling, it was also an appearance in the Texas Bowl, which ended in a 31-7 defeat at the hands of Arkansas.

This time around, if SB Nation’s bowl projections prove true, the Texas will be pitted against yet another formidable foe in Mississippi State, which is currently 8-3 with its only losses coming to Auburn, Georgia and Alabama. Before a potential trip to NRG Stadium, though, Texas must first finish the regular season at DKR against a Texas Tech team that will be fighting for a bowl berth of its own.

In any case, if the objecting entering the Tom Herman era was progress, such a goal became reality on Saturday in Morgantown. That step forward may very well result in steps towards Herman’s old stomping-ground in Houston for a Big 12-SEC battle  during bowl season.

The post Now 6-5, Texas projected to square off with Mississippi State in Texas Bowl appeared first on Hook ‘Em.

Where are the Longhorns going bowling this December?