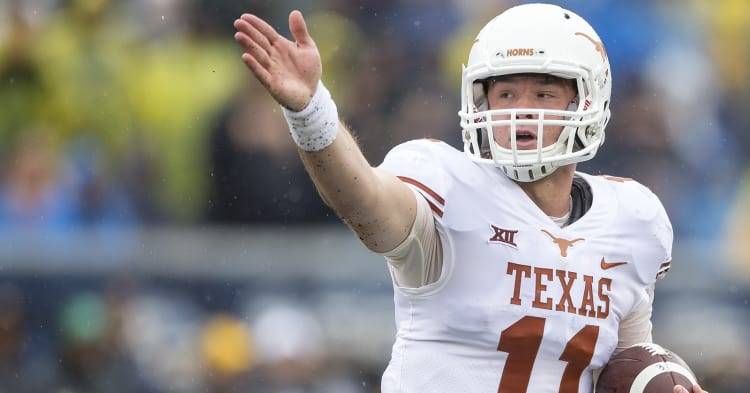 MORGANTOWN, W.Va. — There were 132 snaps taken in Texas’ 28-14 win over West Virginia on Saturday. Here are five that ended up making a big difference:

With 39.0 points per game, West Virginia had boasted the 11th-best scoring offense in the country. Texas, though, held the Mountaineers to their lowest score of the season. Things may have been different had WVU not lost the football, a scoring opportunity and its quarterback on one first-quarter play.

After replay overturned a touchdown run for West Virginia, Texas held on a play from the UT 1. On third-and-goal, West Virginia quarterback Will Grier then attempted to score himself. Grier was met by the goal line by Texas safety Brandon Jones.

Grier lost the football as he was hit by Jones, and Texas was awarded a touchback after the loose ball ricocheted off the pylon and out of bounds. Grier, who had ranked among the top three FBS quarterbacks in passing yards (3,440) and touchdown passes (34), also broke a finger on his throwing hand on the play. He did not return.

By design, Shane Buechele and Sam Ehlinger were both given chances to direct the UT offense on Saturday. Buechele started but had two drives undone by penalties and a dropped pass by John Burt. Ehlinger went 3-and-out on his first possession.

Ehlinger’s second possession carried over into the second quarter, and his first snap of the session was a 50-yard pass to Reggie Hemphill-Mapps. Ehlinger’s throw in a steady rain covered 25 yards, and Hemphill-Mapps took care of the rest.

Set up with a first down at the West Virginia 20, Texas scored seven plays later on Ehlinger’s four-yard toss to Kendall Moore. Ehlinger also ran for eight yards on a 4th-and-2 during the 11-play, 91-yard scoring drive.

Buechele sat for the rest of the game, and Ehlinger’s two touchdown passes led UT to a 14-0 lead at halftime. With less than six minutes left in the third quarter, Ehlinger drove the Longhorns to a first down at the WVU 5.

Ehlinger was then pressured by West Virginia safety Dylan Tonkery. While attempting to avoid a sack, Ehlinger made an ill-advised throw that was intercepted by Kenny Robinson. The West Virginia defensive back then cut UT’s lead in half with a 94-yard return.

The interception was Ehlinger’s fifth of the season. He finished the game with 227 yards of offense (136 passing, 68 rushing and 23 receiving).

Following Ehlinger’s turnover, Texas and West Virginia exchanged punts. UT then put together a two-play scoring drive to take a 21-7 lead. The Longhorns led off with a 36-yard run from freshman Daniel Young, which set up Kyle Porter’s 10-yard score.

The touchdown run was the fourth of the season for Porter, who had eight carries over his previous four games. Porter finished with 53 rushing yards on seven carries. Young, meanwhile, led the Longhorns with a game-high 85 yards.

5. Another highlight for DeShon Elliott

West Virginia attempted to piece together a fourth-quarter rally, but UT’s defense stepped up. After opening the quarter with a first down at Texas’ 25, West Virginia moved one yard in three plays. Receiver Gary Jennings then seemed to break open in the end zone on fourth down.

West Virginia scored on its ensuing possession to pull within 21-14. Texas, though, later recovered a fumble inside the West Virginia 10. That turnover set up the final score, a one-yard run by Young.