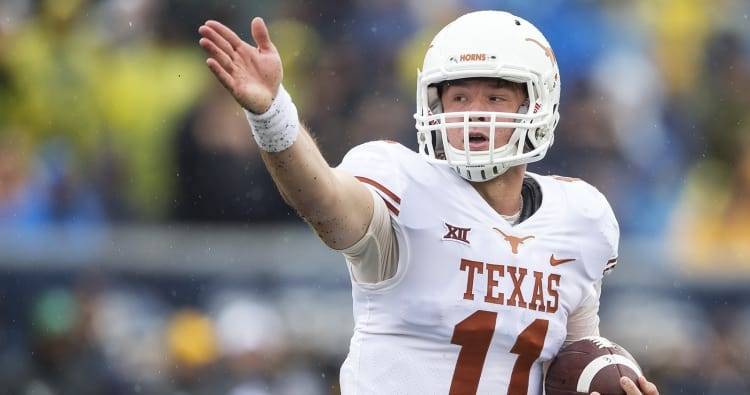 The Longhorns are now bowl-eligible, but in reality, they haven’t accomplished anything yet.

Look around the campus. The women’s soccer team, ranked 18th nationally, just capped a terrific season by reaching the third round of the NCAA tournament. The volleyball team, ranked No. 2, is closing in on an undefeated season in Big 12 play.

“Obviously, a lot of people would kill to be an athlete for the University of Texas,” senior volleyball player Chiaka Ogbogu said. “I’m just honored that I get to be one of those.”

Both Texas basketball teams are off to undefeated starts. The second-ranked women have serious Final Four aspirations and the men, just outside the top-25 rankings, could face No. 1 Duke later this week.

“In all reality, having this (logo) on your chest, it just creates a level of interest from your opponent to come and kick your butt,” men’s coach Shaka Smart said.

Herman’s Longhorns are going bowling in December, but Texas (6-5, 5-3 Big 12) has no reason to ease up this Friday against Texas Tech (5-6, 2-6). The football program now has some momentum it cannot squander.

As Herman correctly pointed out, Texas has not finished the regular season on a three-game winning streak since 2009, the year UT last played for the national title. Since then, Texas has gone 1-6 on senior night — an awful string in what’s supposed to be a glorious send-off event.

The Longhorns haven’t even posted a winning record since 2013, a year that ended with a thud and coaching change.

Now, Herman sees a real path to prosperity. Beating the Red Raiders would give the Horns a 7-5 regular-season record and put them in contention for a better bowl.

The Alamo Bowl would still be possible if TCU or Oklahoma State stumble. Otherwise, the Camping World Bowl in Orlando, Fla., or the Texas Bowl in Houston are likely candidates.

Currently, Texas has the nation’s second-ranked recruiting class. Herman wants to sign every player possible during the new early signing period from Dec. 20-22. Then the Longhorns would shoot for a bowl win sometime after Christmas.

“We’ve got a lot of momentum,” Herman said. “We’ve got confident kids in that locker room. Winning this one would go a long way to building upon that.”

The Horns will honor 13 seniors on Friday, including Hughes, cornerback Antwaun Davis and kicker Mitchell Becker. Those fifth-year seniors are the last three remaining links to the 2013 squad, which had a chance to win the Big 12 title on the final day of the regular season. Texas has gone 22-26 in the four seasons since.

Linebacker Gary Johnson was named the Big 12’s co-defensive player of the week for his efforts against West Virginia. He had seven tackles and combined with Malcolm Roach for a critical sack and fumble recovery late against the Mountaineers.

It’s probably smart for Herman to remove all quarterback uncertainty. Freshman Sam Ehlinger will start against Tech, the coach said. This comes after Ehlinger threw two touchdowns and ran for 68 yards against West Virginia.

On the flip side, Herman confirmed that linebacker Breckyn Hager will miss the first half against Tech for a targeting penalty last weekend. Twice, the coach refused to comment about a West Virginia player grabbing Hager’s facemask and pulling his head downward, just before the hit on the quarterback. Big 12 rules prevent coaches from commenting about officiating.

Left guard Patrick Vahe also will miss this week’s game due to a sprained knee ligament. Nickel back P.J. Locke III (ankle) is still unlikely to return, and tight end Cade Brewer (knee) is probably out for the season.

Herman continues to put a major emphasis on the senior class this week. “They want to be remembered as the senior class that ushered in a new way of doing things,” he said. “A return to prominence to where they all believe Texas should be.”

Given how things look currently, the Horns might finally be on the right path.

The post Now chugging with momentum, Texas has no reason to let up against Red Raiders appeared first on Hook ‘Em.

After redshirting this year, tight end Andrew Beck could return to Texas in 2018