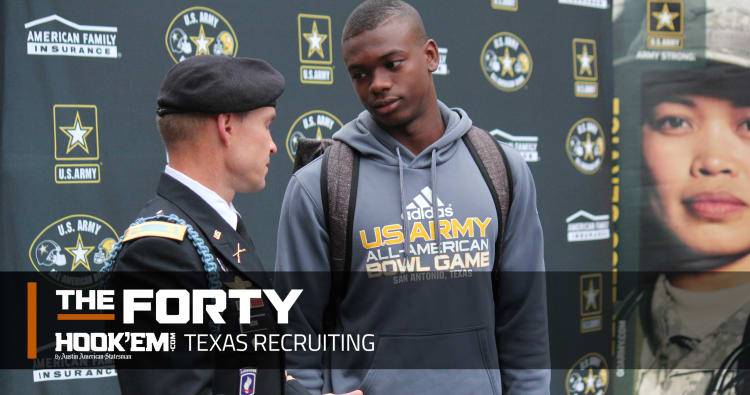 Cook, a 5-star cornerback from Houston Lamar, was set to announce Oct. 30 between Texas, LSU and Ohio State. That date was moved back when Cook, the top-ranked uncommitted prospect in Texas, wasn’t ready to make his decision. All three schools have made their final pitches, and the Longhorns are eagerly awaiting his looming decision.

“I need to make my decision soon because of national signing day in December,” Cook said. “It’s been a tough decision. I have some great options to choose from and I feel like each of the schools offers me something great.”

Texas is leaning on in-state pride. Cook takes being a Texan seriously and admits joining fellow Lamar teammates D’Shawn Jamison and Al’vonte Woodard at Texas, along with other top prospects from the Houston area in the 2018 class, is appealing.

“Tom Herman was a big factor in our city when he was at Houston, and playing for him at Texas would be great, especially with a bunch of guys I’ve played with in high schools and at all the elite camps,” he said.

LSU is pushing the depth chart. Cook believes he could compete for a starting spot as a freshman in Baton Rouge.

Ohio State is selling a winning tradition and the recent success of defensive backs leaving for the NFL.

Whether Cook will admit it or not, it does feel like a two-team race between Texas and LSU heading down the home stretch.

“I’ve spent a lot of time praying on it and talking to my family,” he said. “I hope I make the right decision.”

That decision should be made within the next week or two. Cook, and all other 2018 prospects, can sign with schools beginning Dec. 20.

Texas is already set to sign the best set of defensive backs in the nation for the 2018 cycle. Cook would make that statement beyond reproach. He would join cornerback Jalen Green and Jamison, his high school teammate. The Longhorns hold commitments from elite safeties Caden Sterns, BJ Foster and DeMarvion Overshown.

“We’re going to make some plays and help change the direction of Texas football,” Foster said. “We want our class to leave a legacy. I can’t wait for us to all get on campus and start working towards winning a championship in Austin.”

The future of the cornerback position isn’t set in stone for Texas, giving Cook a chance to contribute as a freshman. Holton Hill was headed toward flirting with an NFL departure before his season-ending suspension for team rules. It remains unknown whether he can work his way back to the team his senior season or if he’ll forgo it for NFL money.

Kris Boyd will be a senior on the other side of the field and should have one starting spot locked down for 2018. With Hill and Boyd back, it’s hard to see how one of the freshmen signees makes it onto the field as a starter in 2018, barring injury.

It’s impossible to have too many defensive backs in the Big 12. Herman knows that. Defensive coordinator Todd Orlando knows that. It’s their job to make sure Cook knows that.

The smart money is still on Texas, though the line is closing with each passing day. The longer Cook takes to decide, the longer LSU has time to work him away from Texas. The Longhorns were the favorites leading into his original commitment date, meaning LSU made up enough ground to push his decision back.

This is an important recruiting battle for Herman and his staff. The 2017 class was lackluster and the Longhorns couldn’t close the stretch with elite prospects when Herman took over the job. Texas’ 2018 class ranks second in the country behind Ohio State, so there is little doubt left that Herman can recruit at Texas.

There are questions remaining about the staff’s closing ability, which is something Charlie Strong and his staff excelled at. Herman is in a real fight for Cook’s signature and the in-state advantage should be enough to land the 5-star cornerback.

The post What would a commitment from Anthony Cook mean for the Longhorns? appeared first on Hook ‘Em.