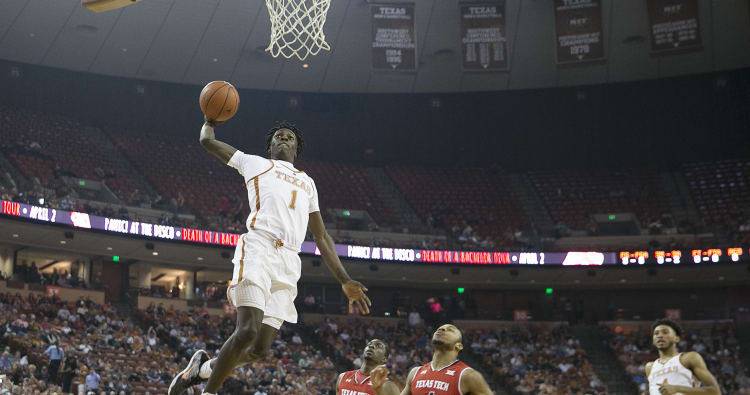 Two talents currently donning burnt orange may very well be playing for a paycheck by this time next year.

In what’s arguably Shaka Smart’s most talented roster since arriving in Austin, freshman Mohamed Bamba and sophomore Andrew Jones serve as the headlining Horns, and understandably so. As Texas’ two leading scorers throughout the first three games of the season, Bamba and Jones have not only displayed why their presences will be so valuable for the Horns throughout the 2017-18 season, but why their skill-sets are worth spending a draft pick on next spring.

To that end, Sports Illustrated released its latest 2018 NBA Draft Big Board and not surprisingly, Bamba and Jones are each expected to hear their name called when that time comes.

“With off-the-charts length and impressive mobility, Bamba is potentially a dominant interior defender. His 7’9” wingspan deserves a sentence of its own. He has a slender frame and continues to round out his offensive skill set, but has shown ability as a jump shooter and is a constant threat to catch lobs. Bamba has an opportunity to evolve into a defensive-minded antidote for the young, perimeter-oriented big men beginning to take over the NBA.”

In just two appearances to date, Bamba has already flashed all of the aforementioned praiseworthy attributes. The former 5-star recruit and McDonald’s All-American notched his first career double-double in Texas’ win over Lipscomb, and he currently leads the Longhorns with 14 points per game, while his 9 rebounds per game also tie a team-high.

The defensive upside of offensive versatility that has NBA scouts so enamored has been on full display, as well.

Although the sample size is minimal, Bamba’s 4.5 blocks per game is tied for No. 4 in the nation, and to complement his elite length and rim-protecting prowess, he’s revealed his shooting touch out to the perimeter.

In short, there’s every reason to believe Bamba will be the next one-and-done at Texas and quite possibly, a budding NBA star in the years to come.

“Jones is an impressive athlete and transition scorer still learning his craft. He may not evolve into a true point guard, but he has nice quickness and a burst that helps him on both ends. His halfcourt skills leave something to be desired, and his jumper is a question mark, but Jones is a nice developmental piece with upside.”

Jones isn’t exactly on pace to be drafted as a foundational piece for an NBA franchise, but there’s plenty to like about his long-term upside. For starters, Jones is nothing short of an elite athlete and his ability to thrive as a finisher in transition can provide a franchise with a base to build the rest of his game around.

Although he’s more of a combo guard, Jones has looked the part of an improved ball handler and facilitator while playing alongside freshman floor general Matt Coleman this season. Through three games, Jones has increased his assist-to-turnover ratio to 2.3:1, which was a noted area of concern when he engaged in the NBA Draft process following his freshman season.

Going forward, though, just how impactful Jones is able to become as a go-to scorer on the wing could either help or hurt his NBA Draft stock significantly.

In any case, enjoy the two Longhorns while they’re still around, Texas fans, because they likely won’t be for much longer.