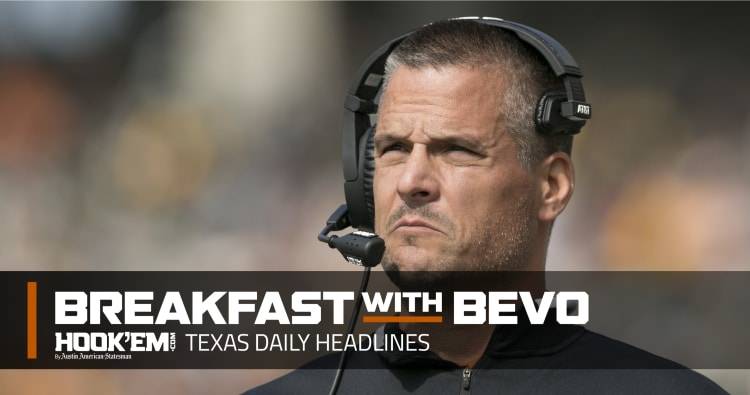 College football’s silly season is set to begin, and Texas defensive coordinator Todd Orlando will surely be mentioned. Orlando has the Longhorns defense playing better than it has in years, so it only makes sense that he will be floated as a potential head coaching candidate. Not that it matters, because on Monday the 45-year-old who followed Tom Herman to Houston said he plans to stay in Austin.

Texas freshman tight end Cade Brewer has been ruled out for the remainder of the season after suffering a torn ACL. The injury happened last week in practice and caused Brewer to miss the game at West Virginia. UT confirmed the news Monday. The Lake Travis product caught nine passes for 80 yards and two touchdowns.

The game between Texas and Texas Tech on Friday may mean little in the grand scheme of college football, but UT appears to still be taking it seriously. On Monday in his weekly press conference, Herman stressed the game’s importance. He also gave updates on several injuries and addressed the situation at quarterback.

What Anthony Cook could mean

Texas already has a stacked class of 2018 commitments, but it is looking to add the top-ranked uncommitted prospect in Texas. That distinction belongs to Houston Lamar cornerback Anthony Cook, who is down to UT, Ohio State and LSU. Hookem.com recruiting reporter Mike Craven broke down what his commitment would mean for the Longhorns.

Basketball team gearing up for PK80

Shaka Smart has the Longhorns off to a 3-0 start, and a big piece of that success has been freshman point guard Matt Coleman. Ahead of a big matchup against Butler on Thursday — and possibly top-ranked Duke after — at PK80 in Portland, we took a look at how Coleman is adjusting to the college game.

Head coaching carousel will spin, but Todd Orlando plans to stick with Texas