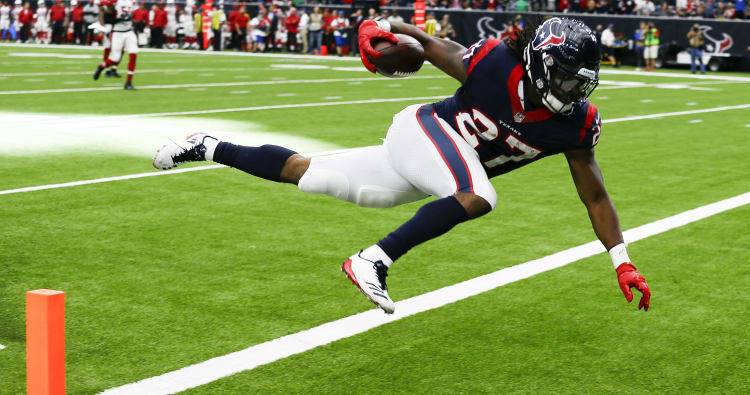 D’Onta Foreman was having his best game of the season as a Texan before being cut down with an Achilles injury. He rushed 10 times for 65 yards and scored twice as the Texans defeated the Cardinals 31-21. Foreman also had three catches for 15 yards in the breakout performance. He’ll miss the rest of the season with the ruptured Achilles, but Houston should be encouraged about next year. Here’s his first career touchdown.

Another former Longhorn, one that was having a resurgent year with a new team, Alex Okafor had six tackles and a half tackle for loss in the 34-31 win over the Redskins. Unfortunately, he also suffered a torn Achilles this week. Okafor signed with the Saints as a free agent and helped the defense improve this season. Though he played in just 10 games he finished with a career-high 43 tackles, 4.5 sacks, two forced fumbles and four passes defended.

Earl Thomas made six tackles, but the Seahawks suffered a setback against the Falcons Monday night. Atlanta was able to put up 34 points against a Seahawks secondary missing a lot of key parts. Thomas returned from injury this week, but he knows the defense is shorthanded without Richard Sherman and Kam Chancellor.

Adrian Phillips, CB, Chargers—Phillips led San Diego with six tackles as the Chargers intercepted Nathan Peterman five times on the way to a 54-24 win over the Bills.

Derrick Johnson, LB, Chiefs—Johnson had four tackles and broke up a pass in a tough 12-9 loss to the Giants.

Justin Tucker, K, Ravens—Tucker went 3-for-3 on field goals and made both extra points as the Ravens shut out the Packers 23-0.

Quandre Diggs, CB, Lions—Diggs made four tackles as the Lions held off the Bears 27-24.

Brian Orakpo, LB, Titans—Orakpo had two tackles, but the Steelers trounced the Titans 40-17.

Sam Acho, LB, Bears—Acho had one tackle and hit the quarterback as the Bears fell to the Lions.

Jamaal Charles, RB, Broncos—Charles turned out to be the odd man out as the Bengals topped the Broncos 20-17. Charles had just three carries for seven yards.

Nick Rose, K, Redskins—Rose made at 38-yard field goal and hit all four extra points as Washington lost to the Saints.

Phil Dawson, K, Cardinals—Dawson made all three extra points he attempted as the Cardinals fell 31-21 to the Texans.

Trey Hopkins, OG, Bengals—Hopkins and the Bengals beat the Broncos 20-17 though they managed just 190 yards of offense. Hopkins was in on 55 offensive snaps.

Hassan Ridgeway, DT, Colts—Ridgeway and the Colts were on bye in Week 11.

Fozzy Whittaker, RB, Panthers—Whittaker and the Panthers on bye in Week 11.

Marcus Johnson, WR, Eagles—Johnson played in 13 offensive snaps, but failed to record a stat as the Eagles routed the Cowboys.

Geoff Swaim, TE, Cowboys—Swaim played in 10 offensive snap but he hasn’t had a reception since Week 8.

Brian Robison, DE, Vikings—Robison missed his first game of the season as the Vikings topped the Rams 24-7.

Malcom Brown, DT, Patriots—Brown has missed the Patriots’ last three games with an ankle injury. He hasn’t played since Week 7 against the Falcons.

Lamarr Houston, LB, Texans—Houston failed to record a stat in the win over the Cardinals.

Colt McCoy, QB, Redskins—One of the most legendary Longhorns in the NFL, McCoy, didn’t make an appearance in the loss to the Saints.

Malcolm Brown, RB, Rams—Brown sprained his MCL in Week 9 and missed the last two wins for the Rams.

The post Longhorns in the NFL: Week 11 breakout tainted by injury appeared first on Hook ‘Em.