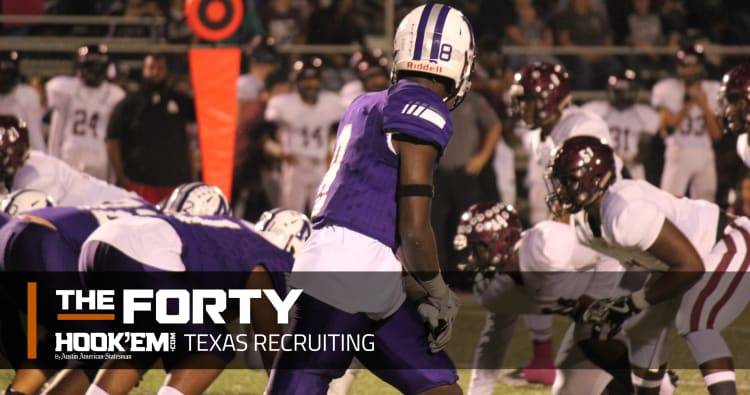 Texas hopes the 2018 recruiting class is academic come January. The Longhorns staff wants all the current commits, and anyone it adds over the next month, to sign in the first national signing period of the cycle that runs from Dec. 20-22. That would leave few fireworks left for February.

It would allow Texas to focus on the 2019 class. Texas only holds one commitment for 2019 — 4-star quarterback Roschon Johnson of Port Neches-Groves. That doesn’t mean Tom Herman and his staff aren’t already forging strong bonds with younger players like Newton junior Tamauzia Brown.

Brown and his Newton team ended the season of Texas commit DeMarvion Overshown last Thursday night in an impressive blowout victory. Brown had more than 100 yards receiving and added an interception on defense. The two-way star could play wide receiver or cornerback in college and it’s clear Texas would vault to the top of his list with an offer. The 6-1, 175-pound athlete already holds offers from Baylor and Oklahoma State.

“I went to all the home games for Texas this season,” Brown said after the victory. “I love it at Texas and feel at home each time I make it to Austin. The coaching staff and the players compete and have fun. I want to go to a place like that.”

The big question regarding Brown is whether his long-term fit is on offense or defense. Brown has a preference.

“If it was up to me, I’d play wide receiver. I like making plays and scoring touchdowns,” he said. “But if my future is on defense and that is the position that would be best for me, then that is what I’ll play for the team.”

Herman needs to add quality depth to the offensive line and the 2018 class isn’t yet at capacity. Despite holding commitments from offensive tackle prospects Reese Moore and Rafiti Ghirmai, the Longhorns have extended an offer to Waco Midway product Kaitori Leveston.

Hearing Midway OT @KaitoriJr has received an offer from the University of Texas. #HookEm #txhsfb

The 6-5, 290-pound tackle is a 3-star prospect currently committed to Kansas State. He blocks for Fabulous 55 quarterback Tanner Mordecai, who is committed to Oklahoma. Leveston is ranked as the No. 117 offensive tackle and the No. 189th overall prospect in Texas, per the 247Sports composite.

Texas has been ravished with injuries along the line and there is no guarantee that All-American Connor Williams will return for his senior season. That means Texas must rely on unfamiliar faces and young players, leaving room for a high-upside prospect like Leveston to find a home in Austin.

He won’t be the type of freshman who’s ready to compete for starting spots. Leveston, like most prep linemen, would need a redshirt year to work on his strength before being tasked with blocking college-level defensive ends.

Leveston does possess great feet for a big man and doesn’t mind mauling defenders at the point of attack.

Jordan Whittington, a 4-star wide receiver in the 2019 class out of Cuero, was originally scheduled to make his college announcement in September. The junior postponed that date so that he could concentrate on Cuero’s eventual playoff run. If Twitter is any indication, he hasn’t cooled on the Longhorns.

Whittington plays nearly every position at Cuero. He lines up at quarterback, running back and wide receiver on offense. He’s also a defensive back. He wants to play offense in college and has already received an offer from Texas at the position.

The Whys of Texas: Fans respond to critics —’For the love of God, have faith in Tom Herman’