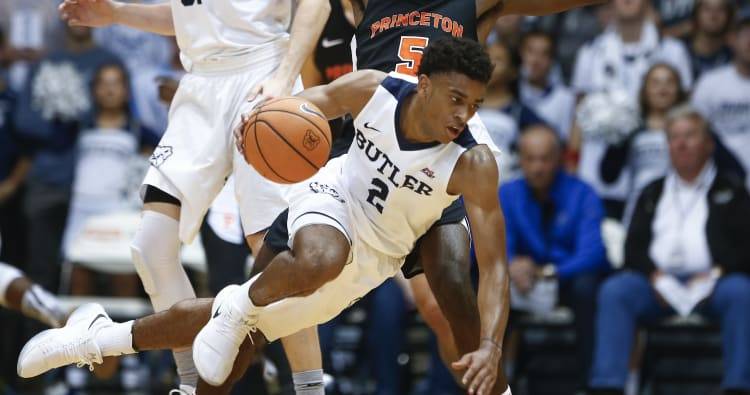 Wins over Northwestern State, New Hampshire and Lipscomb were easy. They were supposed to be. None of them can be found among the top 150 teams in Ken Pomeroy’s analytical rankings of all 351 Division I basketball teams.

Coach Shaka Smart is grateful for his team’s good fortune thus far. However, the PK80 Invitational in Portland, Ore., will be a far better gauge on where the Longhorns stand and whether this is a legitimate top-25 caliber bunch or not.

It’s a unique 16-team event created by Nike to celebrate founder Phil Knight’s 80th birthday. Practically every major Nike school will be in attendance. Texas will open against Butler (3-1) on Thursday. A potential date with top-ranked Duke (5-0) could happen on Friday if both teams win.

The Longhorns will play a third game on Sunday, and there’s a host of brand-name choices. No. 7 Florida, Stanford, Ohio State and No. 17 Gonzaga are in the other half of the PK80 so-called Motion bracket.

“Obviously the competition is going to go up significantly with Butler,” Smart said. “We’re just flat-out playing a much more talented, multi-dimensional team in Butler than we’ve played so far..”

If Texas could finish 3-0 on Thanksgiving weekend, Smart’s club would rocket onto the national radar as a major Big 12 threat to Kansas.

“If we defend at a high level, if we’re unselfish, we can just take care of the ball and be there for each other, we should have the season that everybody wants,” guard Matt Coleman said.

The defense hasn’t been an issue thus far. It’s been outstanding. Texas’ first three opponents shot a combined 32.8 percent from the floor, a total that’s among the top-10 lowest in Division I.

UT’s performance against Lipscomb was probably the best. The Bisons made only 17 of 58 shots overall (.293) and two of 23 from 3-point range. Smart was pleased the Horns kept up their defensive intensity even though their own shots weren’t necessarily falling.

Freshman Mo Bamba had his first double-double with 13 points and 10 rebounds along with five blocks in just 19 minutes.

Bamba showed real fire after getting dunked on by 6-foot-9 Eli Pepper, who later retweeted a post that said, “Welcome to my POSTER Mo Bamba.” Smart couldn’t help himself. “I told that kid after the game I would have talked trash after that dunk, too. That was impressive,” the coach said with a laugh.

“Mo’s a guy that if you make him mad, you will turn him on,” Coleman said. “After he did get posterized, I said that was a bad idea. He was going to have a heck of a night.”

Smart said Bamba may have gotten a little overzealous with his chirping, but otherwise, he stayed in control.

“It’s good when those sorts of things happen to let the guys know this is real, and this is what we talked about,” Smart said. “There’s no reason to flip out. We just need you to go play, and do what we’ve practiced doing.”

There could be some big momentum swings in Portland, types of moments that shape a team’s overall psyche. Every player will come away with some kind of lesson.

Smart said this weekend is about three things. He wants the Longhorns to get better, draw closer as a team and have “the opportunity to play some high, high level competition and hopefully pick up some wins that can help us now and later in they year.”

They’ll also do it wearing special Nike uniforms that look more Halloween orange than burnt orange in promotional photos. That’s OK as long as Texas has the look of a winner.

The post PK80 Invitational will be major barometer of where the 3-0 Longhorns truly stand appeared first on Hook ‘Em.

Preview: Texas vs. Butler in the PK80 Invitational