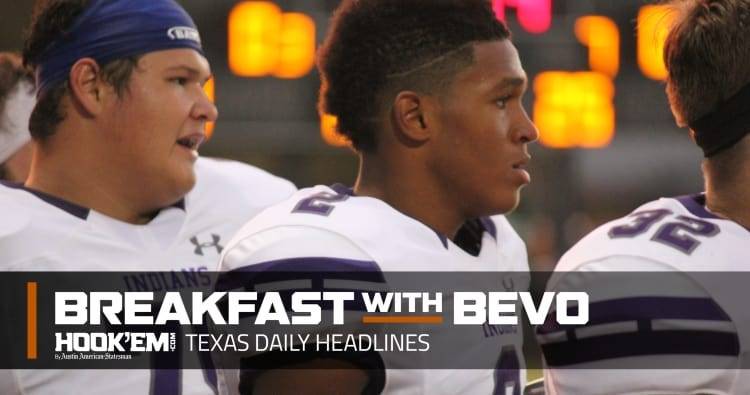 Tristen Bayless to play for Texas in 2019

Left-handed pitcher Tristen Bayless will play for the Texas baseball team in 2019 after spending the upcoming season playing for McLennan Community College. Bayless spent the 2017 season with the Texas A&M Aggies where he pitched just three innings. The Texas coaching staff expects him to compete for a weekend starting spot next fall.

Texas commit Roschon Johnson accounted for 10 touchdowns in the opening round of the Texas high school playoffs as Port Neches-Groves defeated Crosby 72-69. Johnson threw for 326 yards and rushed for another 272 in the win. He scored 5 rushing touchdowns to go with 5 touchdown passes.

Cornerback D’Shawn Jamison, who plays at Houston Lamar, is the most recent commit for the Longhorns’ 2018 class. He, alongside Al’vonte Woodard, will attempt to add another highly touted corner, Anthony Cook, to the Texas Class of 2018. Recruiting writer for Hookem.com Mike Craven got to ask some questions of Jamison about the recruiting process.

Texas senior middle blocker Mirta Baselovic doesn’t have all the stats of her fellow seniors, but her leadership has been an important asset to the volleyball team. The Croatian has a father who played professionally and she originally wanted to play on the east coast. But Longhorns coach Jerritt Elliott convinced her to take a chance on Texas. Though she doesn’t get on the court much, her teammates use her as another set of eyes to help figure out how to best approach the game.

Not surprisingly, Mohamed Bamba and Andrew Jones are among the names listed on the NBA Draft Big Board released by Sports Illustrated. Bamba is at No. 5 while Jones is listed at No. 38. The two are currently Texas’ leading scorers and are expected to make the jump to the NBA next season. Bamba is averaging 14 points and 9 rebounds a game. His physical attributes alone are something NBA teams look for in defenders. He’s averaging 4.5 blocks per game so far in the young season. Jones still has plenty that he can improve upon, but his athleticism is something NBA teams seek out.

Former Longhorns basketball player Jarrett Allen spent Tuesday with 25 middle school students as he took them shopping for Thanksgiving. Allen provided a list and $70 for each student to spend on a Thanksgiving dinner. The project helped the students learn how to shop with a budget. Not only did the kids learn a lesson, but the 19-year-old learned a thing or two as well.

Longhorns in the NFL: Week 11 breakout tainted by injury