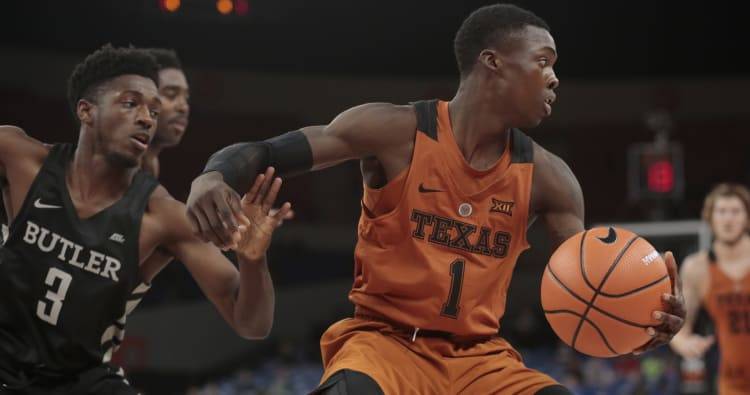 The Texas Longhorns knew they would be tested at the PK80 Invitational in Portland, Ore. Consider their first exam a passing grade as the Horns defeated Butler 61-48 on Thanksgiving evening.

The win sets up a tougher test against top-ranked Duke on Friday at 5:30 p.m. Eastern. The 6-0 Blue Devils defeated Portland State 99-81 earlier Thursday, though they trailed 49-45 at halftime.

Andrew Jones led Texas with 16 points while Dylan Osetkowski added 12 points and seven rebounds as the Longhorns pulled away.

Both teams started the game cold, but the Longhorns (4-0) were able to finish the contest shooting 40 percent. Butler (3-2) ended the game hitting just 33 percent of its shots.

Eric Davis Jr. came off the bench to score nine points, hitting 3-of-5 from 3-point range.

Matt Coleman continued to play the role of court general as he scored seven points, dished out nine assists while turning the ball over just once. He also added six rebounds and three steals, providing whatever the Longhorns needed.

Texas led Butler 22-19 at the half but outscored the Bulldogs 39-29 in the second half to pull away at the end. Butler trailed by 10 points at one point in the second half but eventually cut the lead to three before the Longhorns scored on three straight baskets to build the lead back up.

Kamar Baldwin led Butler with 15 points and six rebounds. Kelan Martin scored 12 points while Sean McDermott added 11 points to round out the double-digit scorers. In all, just five Bulldogs scored in the contest.

The Longhorns won’t have the benefit of sneaking up on the Blue Devils in Friday’s contest. Duke already received its wake-up call in the game against Portland State.

The Vikings put up a good fight in the first half, causing Trevon Duval and the Blue Devils to reassert themselves as the top team in the nation in the second half. Duval scored 22 points while Grayson Allen added 14 points and nine assists in the win.