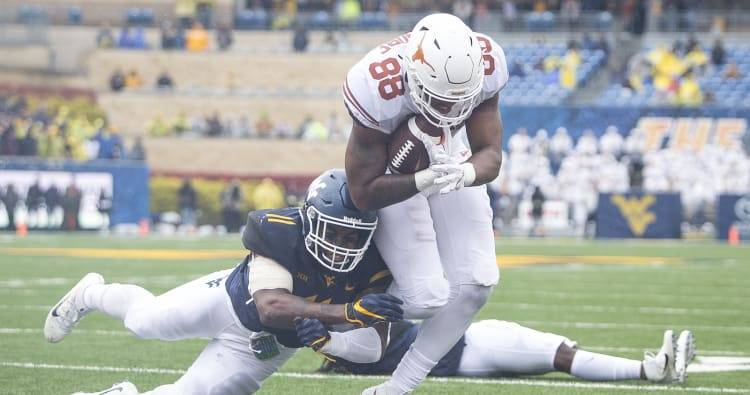 This week’s notable number is 3.

Three is the number worn by senior wide receiver Armanti Foreman, who has 22 receptions and a team-high three touchdown catches. One year after his brother D’Onta Foreman ran for 100 yards in each of his 11 games, Texas’ running game has only three 100-yard performances this season. Earlier this year, Holton Hill became the third Longhorn to score on an interception in consecutive games.

Three also represents the number of tight ends that have started for Texas this year. That number doesn’t even include expected starter Andrew Beck, whose year was ended by a preseason foot injury.

Tight end was an area of concern throughout the spring and summer. UT has continued to find more questions than answers at the position.

Beck went down in August. Garrett Gray, who started against Maryland, and freshman Cade Brewer, who started three games, both suffered knee injuries. Freshman Reese Leitao was suspended for the first two games after he pleaded guilty to a misdemeanor drug possession charge, and Texas redshirted him upon his return.

When Texas hosts Texas Tech on Friday, look for either Kendall Moore or Chris Warren III to be the starting tight end. Warren started at running back as recently as the Baylor game on Oct. 28. Moore is a graduate transfer from Syracuse who has appeared in eight games and made four starts.

“That’s just selflessness, that’s all that is,” quarterback Sam Ehlinger said. “Chris has done a great job of coming in and learning the plays really quickly and doing an excellent job scoring a freaking touchdown. Kendall’s been behind Cade all season, obviously, but he’s been right there.”

Moore’s 4-yard trip into the end zone against West Virginia accounted for his first catch as a Longhorn. It was a long time coming.

He committed to Texas in April after a four-year career at Syracuse that included 15 catches and an injury-shortened 2015 season. Due to what Moore called a miscommunication with an academic advisor, he did not graduate until late July. Moore, who is studying sport management at Texas, still arrived in Austin in time for the first day of practice.

Used primarily as a run-blocking option, the 6-6, 250-pound Moore started against San Jose State, USC, Kansas and West Virginia. Against the Mountaineers, he grabbed a short pass from Ehlinger and then shook off two tackles. His touchdown gave Texas a 7-0 lead.

“It was pretty fulfilling,” Moore said. “Just going through a long season of kind of being sidelined and not being used as much, just having that moment of shine was pretty good.”

After Texas’ 14-point win in Morgantown, the Longhorns celebrated in their locker room. Two days later, senior Lorenzo Joe told reporters that Moore — who like his father and brother is a member of the Omega Psi Phi fraternity — displayed some of the team’s best dance moves.

Both Moore and the Longhorns had reasons to celebrate. Texas (6-5) had secured its first bowl berth since 2014. The 2013 Texas Bowl was the only bowl game that Moore played in during his time at Syracuse.

Nov. 17: 38, and comparing Will Grier to Baker Mayfield