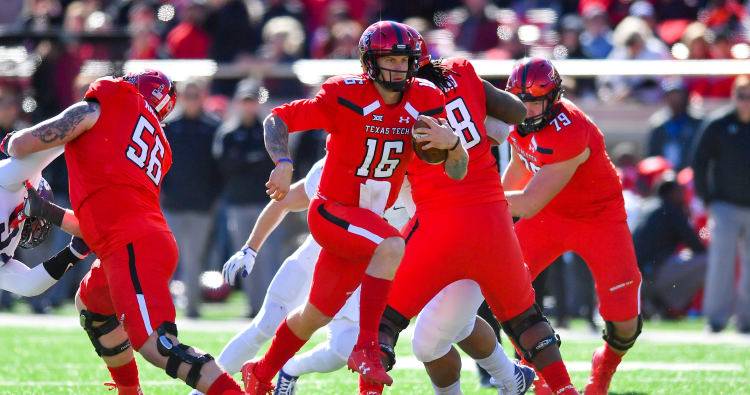 The Longhorns have faced every top-rated passer this league can offer, save for Shimonek, the Red Raiders’ gunslinger who’s averaging 313.7 yards per game, the eighth-best average in the country. He doesn’t make too many mistakes, either. Shimonek has thrown 28 touchdowns and only eight interceptions.

Texas safety DeShon Elliott learned this week he was a finalist for the Thorpe Award, presented annually to the nation’s best defensive back. Another interception or two might help his postseason honors, not to mention add fuel to the NFL draft talk. Cornerback Davante Davis had a solid showing against West Virginia playing extended time in Holton Hill’s position, too.

Texas coach Tom Herman said Monday that freshman Sam Ehlinger will start against the Red Raiders. This comes after Ehlinger threw two touchdowns in the 28-14 win over West Virginia. It’s unclear whether sophomore Shane Buechele will play on the third offensive series, as Ehlinger did last week.

Texas needs to start fast and bury Tech. The Raiders have shown almost no ability to fight back under coach Kliff Kingsbury. Tech is 1-27 under him when trailing at halftime. This series started in 1928, and through all those years, Tech is 6-30 all-time in Austin. That being said, this is the same Tech squad that left town victorious in 2015.

The Red Raiders haven’t had a solid run defense in years. They’ve finished at the bottom of the Big 12 in that category for three straight years. This season’s defense is a tad better, allowing 157.7 rushing yards per game, which ranks seventh in the Big 12. Safety Jah’Shawn Johnson is the team’s leading tackler with 82 stops.

Herman said he’s still looking for a “difference-maker” at running back, but that person might be on his roster. How about freshman Daniel Young? In short order, he now ranks third on the team with 270 rushing yards. With two solid outings, he can finish the year as the team’s leader in that category.

The Longhorns have had some crazy moments with the football this season. Ehlinger’s wild scramble to chase a botched snap against Oklahoma State comes to mind. Kris Boyd has also coughed it up on a kickoff return. But the Horns have lost only five fumbles all season long, which is tied for the second-lowest total in the Big 12.

The Red Raiders are plus-nine in turnovers gained this season. They’ve jumped on 11 fumbles and have 12 interceptions. Tech has done a slightly better job than UT this season at creating fumbles, though. The Raiders will be looking to knock the ball loose on any occasion. The Horns cannot give up freebies and lose field position by being careless.

Simply put, if Tech can pull off the upset, it would be a win that probably saves Kliff Kingsbury’s job.  Tech is 5-6 and needs one more victory to become bowl-eligible. Tech and Texas are just two of three Big 12 schools that rank among the top 20 nationally in bowl appearances. Making the postseason is critical in Lubbock, as it’s something the Raiders fan base expects year in and out.

Compare that to Texas’ situation. The Longhorns are now bowl-eligible after knocking off the Mountaineers. Herman’s club has a real chance at finishing 8-5 this season and launching into 2018 with major momentum. This is not the time to slip up against a team reeling toward the finish line.