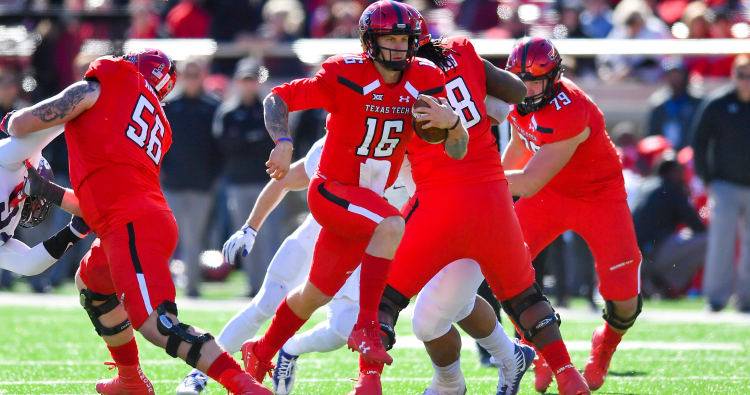 We’re interviewing the beat writer of Texas’ opponent each week this season. This week, Carlos Silva, Jr., (@cmsilvajr) of the Lubbock Avalanche-Journal offers his insight on the Texas Tech Red Raiders.

1. Texas fans can relate to Texas Tech’s offensive struggles against TCU. Was last week’s 27-3 loss a credit to the Horned Frogs or has Kliff Kingsbury lost his offensive touch?

Considering TCU was down a starting safety (Niko Small) and leading tackler (Travin Howard), it would have been easy to think Texas Tech would have been at an advantage with its offense. The key was play-calling as Texas Tech went to the red zone four times and came away with three points. As Kingsbury mentioned, his offense — ranked 127th in the country — needs to execute.

2. What has been the most impressive part of Nic Shimonek’s season?

If you look at his full body of work, which is mainly this season under center, it’s been the ability to stay even-keeled and make the deep and intermediate throws. Shimonek is also an efficient passer, but has seen that drop off when Big 12 play started and teams began to run the Cover 3 Cloud coverage — also called double cloud by Kingsbury and players.

3. Which one of Texas Tech’s receivers — Keke Coutee, Dylan Cantrell or Cameron Batson — should Texas be most concerned about?

Coutee is the most dangerous threat, but was limited against TCU and Baylor — four catches for 48 yards combined in both contests. If it were me, redshirt freshman T.J. Vasher (listed at 6-foot-6, 190 pounds) is a big-play threat that is destined to be a playmaker if given the chance. Showed it in a 113-yard, two-touchdown performance against West Virginia earlier this season.

4. Statistically, Texas Tech’s defense is better than it was in 2016. Do the Red Raiders pass that eye test, though?

When you look at the Red Raiders defense now, I would say they pass the eye test. The linebackers — Jordyn Brooks and Dakota Allen — can stop a run game. Also, the defensive line and secondary has a decent rotation which allows players to get a rest and not lose anything on the field. Neither were the case a year ago, nor was the ability to create turnovers.

5. Name one Texas Tech player that Texas fans aren’t talking about — but should be.

You know, locally, Justus Parker (four forced fumbles, three interceptions, one fumble recovery) is a name that we’ve mentioned a ton but I don’t think gets mentioned much. He’s been a playmaker all year. Was a walk-on who came from Texas Lutheran, sat out last season due to transfer rules and has been a key player on the defense the last several weeks. Forced a key turnover that was recovered at the TCU 6, which Texas Tech did not turn into points. A score likely could have made the game 10-10 in the third quarter.

6. Since it’s the holiday season, what is the side dish that must be on your Thanksgiving table?

Can’t go wrong with a nice side of mashed potatoes, especially if you add a few extras like bacon, chives, sour cream or cheddar cheese. Top it off with some turkey gravy, easily the part of Thanksgiving I look forward to.

The area round guide to watching Texas commits in playoff action