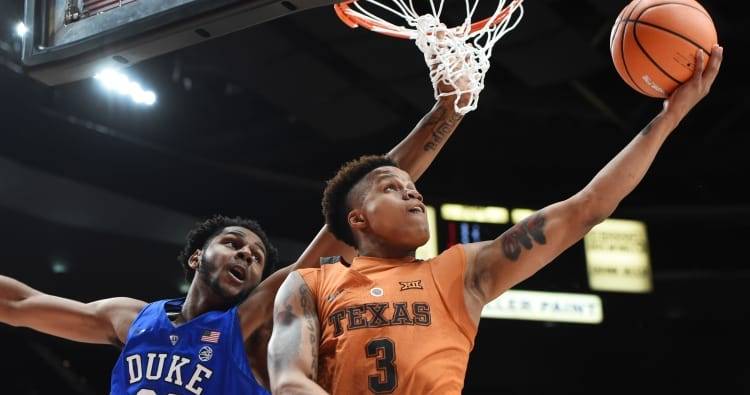 PORTLAND – Cinderella’s slipper didn’t quite fit. But then again, it’s only November.

Texas nearly pulled a massive upset over No. 1 Duke on Friday in the second round of the PK80 Invitational, leading by as many as 16 before eventually falling 83-78 in overtime to the top-ranked Blue Devils.

“I think we showed how good we can be,” Texas coach Shaka Smart said.

Texas earned a 64-48 lead midway through the second half but faltered down the stretch and succumbed to the sheer blue-chip talent of the Blue Devils.

Duke freshman Marvin Bagley III had the biggest of performances, tallying 34 points and collecting 15 rebounds in the huge comeback win.

The eyes of NBA scouts and executives were fixed upon the matchup of Bagley vs. Bamba. The two freshmen towers are among the most highly-regarded players in the 2018 draft class.

Both provided big moments, like when Bamba swatted a Bagley shot with 30 seconds left in regulation to preserve a lead.

Bagley, however, got the last laugh. He missed a potential game-winning three to end regulation then played huge in overtime. Bamba fouled out in the closing seconds of regulation, giving Duke an and-one basket and the lead.

“He does a lot of things well for his team, not only on the offensive end, but defensively getting blocks,” Bagley said of Bamba.

Duke is much more than just Bagley. The Blue Devils boast four of the top 10 freshmen in the country, plus baby-faced senior graybeard Grayson Allen. The preseason All-American totaled 12 points and five assists while dealing with foul trouble that sent him to the bench early.

For most of the way, it looked like Texas would dunk and defend its way to a massive upset.

All throughout, the Longhorns showcased their athleticism and power with a highlight reel of jams that seemed incomplete without a SportsCenter jingle.

Late in the first half, Roach drove through the lane and threw down a jaw-dropping right-handed jam in traffic. The crowd, though mostly pro-Duke, jumped to its feet and roared.

To start the second half, more fireworks. On a fast break, Matt Coleman threw a behind-the-head pass to Bamba, who finished with a two-handed slam.

Osetkowski joined in on the fun when he caught an Andrew Jones pass, cut baseline and threw down a monster right-handed flush.

A flurry of three more dunks and an Osetkowski and-one made the score 64-48. At that point, Texas looked confident and loose. But then, the Duke comeback, for which Texas had no answer. The Blue Devils went on a 22-6 run to knot the game at 70.

“There were some magical plays there,” Duke coach Mike Krzyzewski said of the comeback.

Texas will play their PK80 finale Sunday at noon against the loser of the Florida-Gonzaga game.