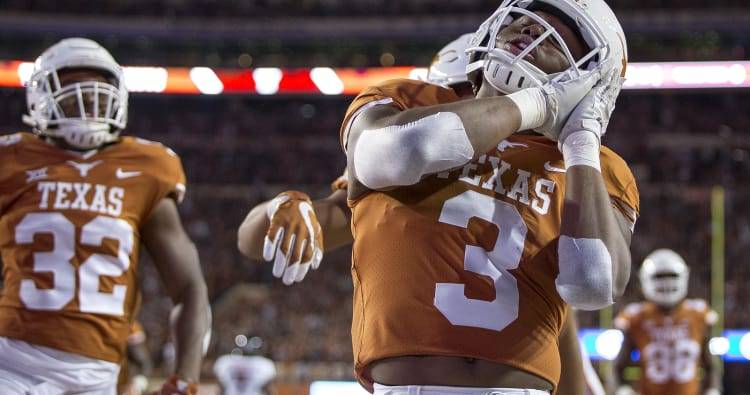 The Longhorns are 10-point favorites tonight.

The Red Raiders are in desperate need of a win — to qualify for a bowl game in their final game of the regular season and, perhaps, to save head coach Kliff Kingsbury’s job. They’re hanging in there. Texas went up early, looking super sharp on the first drive of the game, then fell behind 10-7 for a time. There was a mid-half malaise on offense; at one point, the Longhorns punted on four straight drives on four straight three-and-outs.

But it was a Michael Dickson punt that actually turned things around; he rugby-styled a punt down to Tech’s 3, and a penalty on the play backed the Red Raiders back to inside the 2. Texas forced a punt and picked up a field goal to tie it, then took the lead thanks to a Kris Boyd interception that he returned down to inside the 10.

Texas Tech, which won the opening coin toss, will get the ball to start the second half.

1. Like last week, Texas is facing a dangerous passing offense. Like last week, the Longhorns are getting the backup quarterback. Nic Shimonek, the fifth-year senior who’s thrown for 3,451 yards and 28 touchdowns this season, was benched. It was explained as a coach’s decision. In his place, McLane Carter has gone 12 of 25 for 185 yards.

So far, Carter — a sophomore left-hander — has had his moments. He found Keke Coutee for 41 yards, then T.J. Vasher for 51. But he’s also thrown two picks that have resulted in 10 Texas points.

2. High points for the Horns?

This time, Herman settled for a 19-yarder.

Texas has had nine drives, all but one quarterbacked by Ehlinger. Shane Buechele came in for the Horns’ third series. Here’s how the drives have played out: