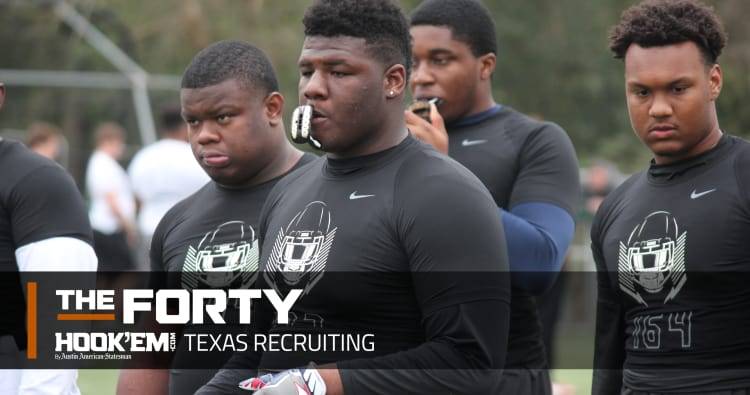 Spring Westfield is 10-0 heading into its area round showdown with San Marcos on Saturday at 2 p.m. in Prairie View. The Mustangs’ defense, led by Texas defensive tackle commit Keondre Coburn, is allowing 8.4 points per game and hasn’t given up more than 10 points to an opponent since September.

“We’re starting to really hit our stride as a defense,” Coburn said. “The first few weeks were tough to find a rhythm because of Hurricane Harvey and the delay in practice. We missed a few games early and we were rusty.”

Westfield is rusty no more. Coburn, a 4-star prospect who committed to the Longhorns August, says he is more focused on football than ever following his personal encounter with the flooding in Houston. He’s ranked No. 10 on the Fabulous 55 and is one of the top 100 recruits in the nation, per the 247Sports composite.

“Not everyone got flooded, but everyone had to deal with the emotional aspects of the damage because we all knew someone who was impacted,” said Desmar Black, Westfield’s co-defensive coordinator and assistant head coach. “Keondre was impacted. He picked himself back up and came back focused.”

“He’s a big guy with a motor, he’s intentional and he wants to be great,” Black said. “He’s a real leader for us and that’s grown throughout his years.”

Coburn will be remembered as one of the top defensive linemen produced by Westfield no matter how the rest of the season goes for the Mustangs. However, Coburn and the senior class can leave its mark on the program by winning a state championship. It would be the first one in school history.

“Once he was committed, Keondre could become completely focused on football and leaving his mark, along with the entire senior class, on this football program,” Black explained. “A lot of great teams and players have come through Westfield, but we’re trying to win a state championship and that’s never been done here.”

It’s not something lost on Coburn. The 6-1, 329-pound bulldozer of a defensive tackle brightens when he talks about his team’s chances to claim the Class 6A Division II championship in December. The Mustangs opened the playoffs with a 42-10 victory over Stratford in bi-district and are considered the favorite to win Region II.

“This is our best team, and our most focused team,” Coburn said. “I think that is the most important part. We’ve always had talent, but right now we’re playing for each other. It’s one game at a time for us, but if we worry about our team it will be hard for someone to beat us.”

Coburn moved to Westfield as a freshman and watched Oliver grow into a 5-star recruit. Oliver eventually signed with Tom Herman, and so will Coburn. Current Texas assistant Corby Meekins was the head coach at Westfield when Coburn began his prep career. He’s now coached by Corby’s brother, Matt.

“No one is Ed Oliver,” Matt Meekins said this spring. “Keondre is his own player with his own skill set. He’s a big guy who is hard to move off the ball and he can make plays all over the field. Football starts on the inside and he gives us an advantage up front defensively.”

Coburn doesn’t need to be Oliver. The current Houston Cougar is a once-in-a-generation type player. All Coburn needed to do to become success was grow up, says coach Black.

“He came here as an athletic baby. He’s grown tremendously in his time here,” Black said. “Keondre had great coaches, uses great technique and filled big shoes when Ed Oliver left. He’s done everything we’ve asked him to do on the field, off the field and in the classroom as a senior.”

Coburn is Texas’ only defensive line commitment in the 2018 recruiting class. The class ranks second in the nation and first in the Big 12. Coburn will participate in The Under Armour All-America Gam in Orlando on Jan. 4. He plans to sign with Texas during the first national signing period in December.

The Eyes of Texas: 3 Red Raiders the Horns will be watching