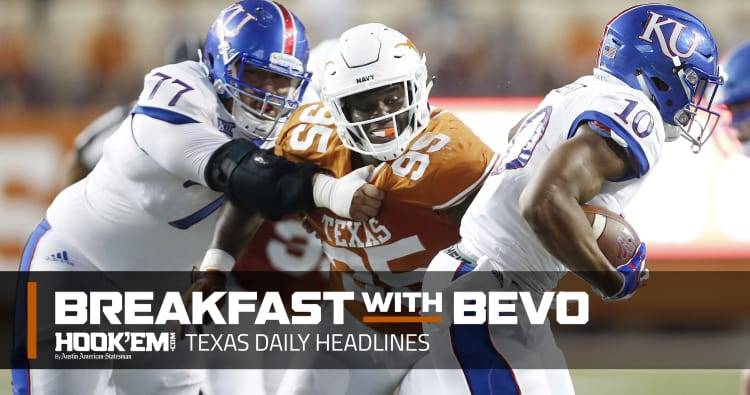 Poona Ford closing out UT career with a bowl game

The last game defensive tackle Poona Ford will play for Texas will be a bowl game. That’s something that hasn’t been a certainty over the last three seasons. Ford having a standout role on the team wasn’t a no-brainer either. Some recruiters thought Ford was too short and too quiet to play for a major college football program. Charlie Strong saw through the reserved exterior and saw a defensive player that is a big reason the Longhorns have the second best run defense in the Big 12.

The Texas basketball team defeated Butler 61-48 in their opening game at the PK80 Invitational on Thanksgiving evening. Andrew Jones led the way as Mo Bamba had to deal with foul trouble. Despite playing 19 minutes, Bamba still managed 12 rebounds and 4 blocks to help the Longhorns set up a game with top-ranked Duke on Friday.

The Longhorns face Texas Tech Friday at 7 p.m. at Royal-Memorial Stadium. The Texas beat writers have you covered with all the preview content you could ask for.

Each week Texas football beat writer Danny Davis looks at a different number tied to the program. That number this week is 3. Davis starts with Armanti Foreman, who wears that jersey number, and moves on to note the number of times a Longhorns player has recorded an interception in consecutive games. He ends with the number of tight ends that have started for Texas this season and the impact they’ve had.